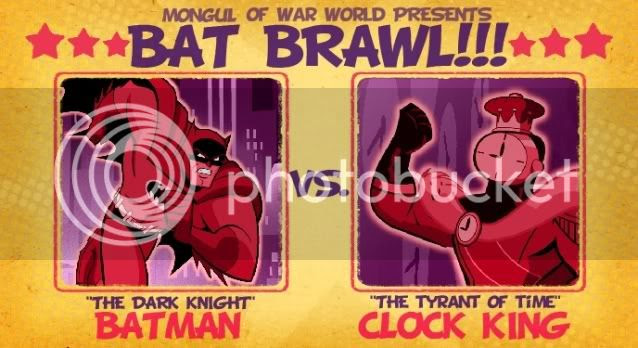 A little whiles back I announced the release of a Flash boxing game I wrote, developed, and designed for the animated series "Batman: The Brave and the Bold."

The rights have reverted back to my creative team, Uppercut Animation, for one year and now you can play it HERE at your leisure.

Hit "TRAINING" for instructions or "Play" to get in there - after the pop-up ad.

Lemme at 'em!
Posted by Michael Lapinski at 9:45 PM No comments:

A quick announcement that the creative team of Swifty Lang, Chris Mangun, and myself (collectively known as Blacklight Comics) have set up a separate blog dedicated to our work together.

Swifty has started us off with an account of our origin story as well as our thoughts behind the name and flashlight logo.

Each one of us will be contributing and I'm particularly interested in reading our unique Rashomon accounts of the same events.

Thanks and Cheers for your support!
Posted by Michael Lapinski at 2:38 PM No comments:

A little whiles back, I shared my thoughts and samples on what I might do if I were given the chance to design covers for a book like DMZ.

In this post, I thought I'd share some roughs I did around the same time if I had to re-imagine covers for the Vertigo book Hellblazer.

The series is the longest-running Vertigo comic and has had storied runs by such creators as Jamie Delano, Garth Ennis and Mike Carey, Sean Phillips, Lee Bermejo, and, more recently, Peter Milligan, Jason Aaron, Sean Murphy, and Giuseppe Camuncoli.

Covers, by the likes of Dave McKean (who designed the first run of the series' covers), Tim Bradstreet (who designed the most), and Glenn Fabry tend to use photo reference or elements, are highly rendered, and are generally muddy or muted in their palette.

The reason I was inspired to try this image is that, although I was never a fan of the book, it became clearer that a long run of covers simply depicting Constantine looking too-cool at the reader did nothing to convince me that there was anything of interest going on behind the cover. Hellblazer has a devout following and these covers are the Vertigo version of simply having a superhero strike a dramatic pose on every cover they appear on. There is no narrative.

So, I gave myself three challenges:
- Look back to the original run of covers and try to emulate how they evoked a sense of the occult in new and unusual ways
- Develop a narrative that suited what I knew of the characters and employed a fairly well-known occult landmark
- Wipe that smarmy grin off of our hero's face. If he's so darn cool, then how exciting it would be to make him suffer!

For the purposes of the illustration, I concocted a story in which all of the spirits that follow John want to finally reach their resting place and use and abuse Constantine to do so. The Tulip Staircase in Greenwich is a beautiful and eerie structure featured in a classic ghost photo that always freaked me out. Combining the two, I developed the visual metaphor of Constantine literally vomiting this stairway to heaven.

Here you have a digital collage I did for layout. 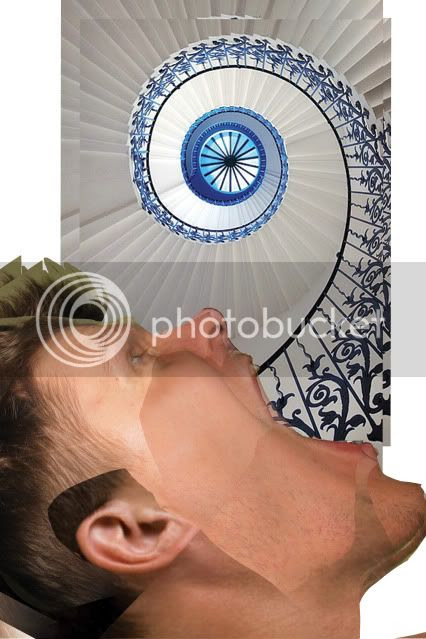 And an illustration in progress. I don't consider this art to be final but I do think it hits on all of the goals I set for myself (in addition to an acid green I hoped would cleanse the muddy palette and jump off of the stands). 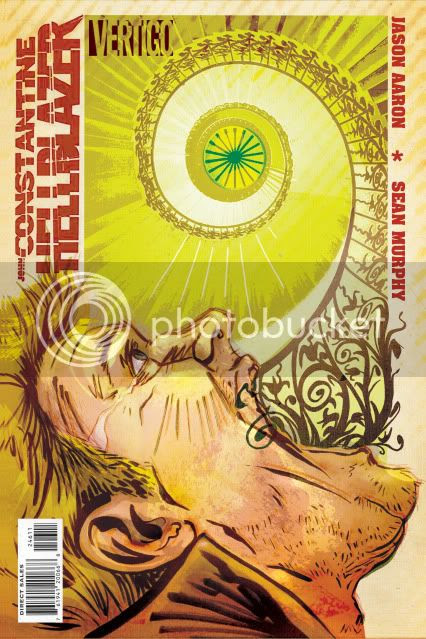 Posted by Michael Lapinski at 9:19 AM 2 comments:

Just wanted to give a heads up to those in the NYC area about the incredible programs at the Museum of Comic and Cartoon Art in Manhattan every Thursday night in February.

With a full round-table discussion with many Spider-Man editors and writers past and present along with a full issue of original John Romita Jr./ Klaus Janson art on the walls. 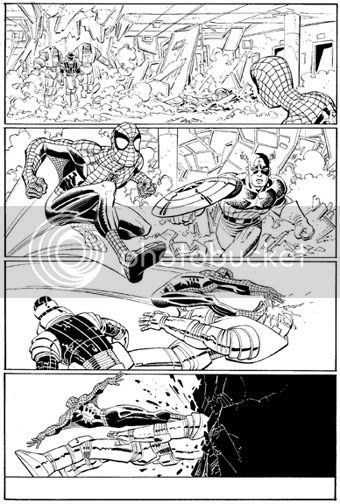 Next week is an amazing meeting of the minds/ worlds for me. I've worked in NYC Animation for over ten years, primarily at Nickelodeon, and only recently started to try my hand at comics. I've taken a class at MoCCA and was floored by their Dave Mazzuchelli exhibition a few months back. Now, they'll be highlighting the other "C" in their name by having Nickelodeon's animation director Dave Levy talk about the process of pitching cartoons for series. 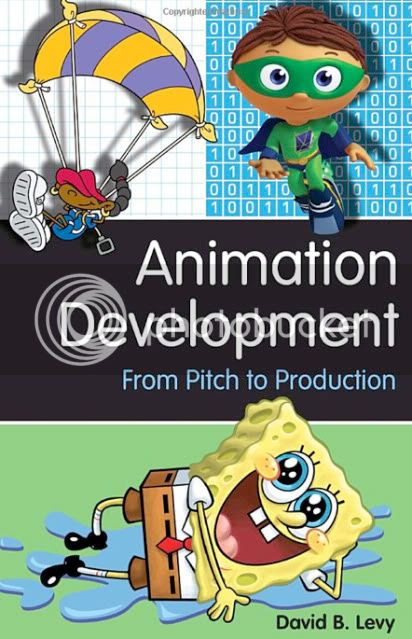 I worked with Dave when he was Animation Director on Blue's Clues and he is extremely passionate and informed about his calling. Dave has served as the head of ASIFA East, written a a book about Animation Development and another informative book on the culture of being an animation professional, and his talk is sure to be insightful for anyone who is curious about getting their foot in the door and making a job of making cartoons.
Posted by Michael Lapinski at 10:18 AM 2 comments:

In the early days of the Marvel Universe, Stan Lee turned to Norse Mythology as a source for creating a heroes that were literal gods among men. Thor is their champion, the God of Thunder and son of the all-powerful Odin. He was cast down to Earth to learn humility in the guise of a human.

The incredible design challenge here was for Jack Kirby to incorporate the trapping of Viking culture and translate them using the bold four-color designs of the Marvel Universe. The result is a graphic "techno-Viking" language that was utterly unique and lent itself to baroque adventures. 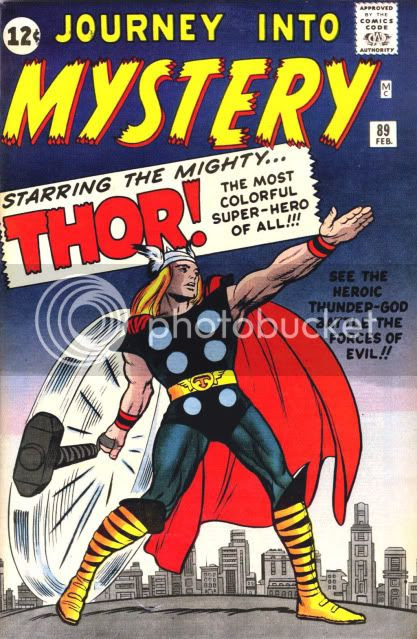 In 2011, Thor may become a household name with the release of Kenneth Branagh's film adaptation as part of the growing Marvel Universe on film.

Since his creation Thor's design has undergone many iterations. The current fashion is for our heroes to be dressed in outfits that fit and "work" as battle garments. The realism of seams and layers trumps geometric idealism.

As part of my morning warm-up and the Bendis Boards "Artists/ Non-Artists" challenges, I took a stab at re-imagining a new version of the costume for the post-film era. 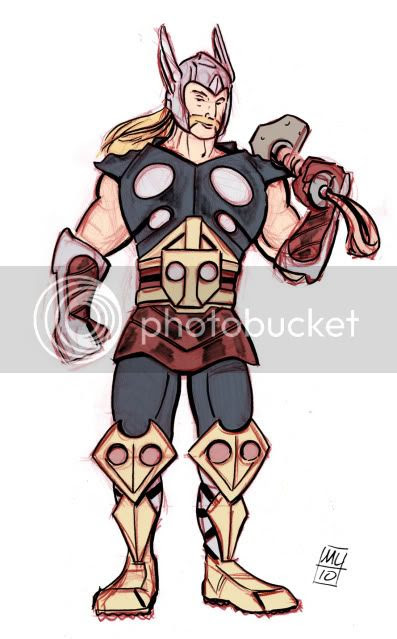 - One thing that really bugs me about the current Olivier Coipel Thor design is that he seems squat and husky. I feel like this guy needs to tower over other heroes like a professional wrestler. In person, you would be shocked by how tall and massive he really it. The chain mail also seems fussy and unnecessary for the arms of a god. 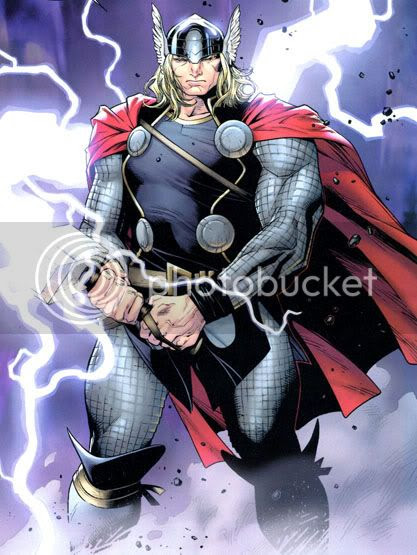 But, check out this room-sized Thor poster that Coipel illustrated as covers to the Tales of Asgard re-prints. Awesome!

- I'm duly impressed with Kirby's visual language for Asgard and it would take some serious effort to come up with an entirely new iconography. The six circles mean little in terms of Norse Myth but are essential to identifying Marvel's Thor. Here, I tried to vary them up and also use circles to create abstract "T"s on the belt buckle and knee pads.

- So, I tried to evolve the basic elements with features I liked about Ultimate Thor, Beta Ray Bill (the alien Thor created by Walt Simonson, the incomparable Thor artist/ writer of the 1980s - see my sketch of the character below), and the Thor of Myth (big belt and gloves, the sense of a bound tunic around his waist). Lose the cape - his hair is active enough for a flowy element.

- One of the most iconic "superhero as god" images in recent memory is Frank Quietly's "All-Star Superman" cover image of Superman chilling on a cloud. Unlike Quietly's AS Superman smile, Thor should have a bemused smirk. He's lived life as a champion and his exile on Earth has humbled him only to the degree of seeming like a really cool big brother.

- Oh, and he needs a sweet, sexy mustache.

And here's my take on Beta Ray Bill: 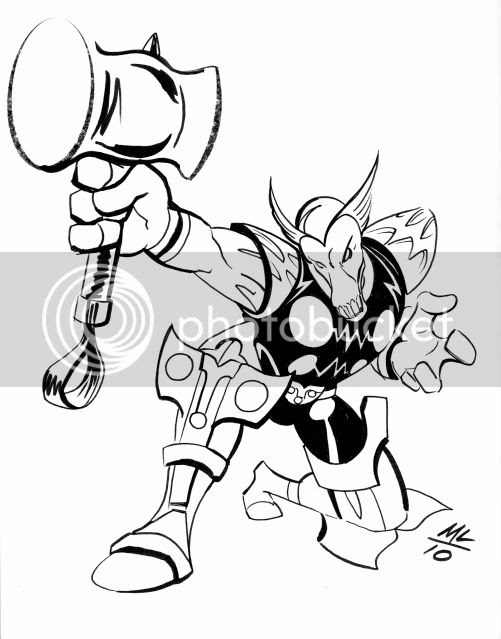 Posted by Michael Lapinski at 9:35 AM 4 comments:

Labels: Character Design, Kenneth Branagh, Thor, Walt Simonson
Newer Posts Older Posts Home
Subscribe to: Posts (Atom)
Thanks for visiting PAWS AS HANDS, the personal art blog for Michael Lapinski, covering my work as comic book creator and animation art director. The blog was originally conceived as a HOW TO by a comic novice who was still learning HOW TO. Feedback encouraged. Cheers!