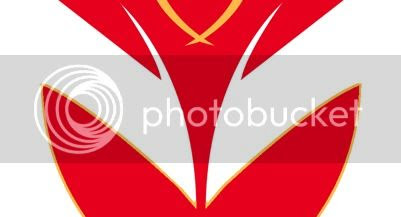 A lot of jibber jabber in the last few posts so I thought I would just post some art as a send-off to a long week.

These are from the character re-design threads I participate in on the Bendis board. I was never much of a DC comics fan, partly because of their characters' cheery demeanor and what seemed like gimmick superpower-driven stories kept me at arm's length.

I definitely appreciate them as icons and the mythologies that have been built around them. Some of the designs are impossible to improve upon (it's like redesigning an Apple) but here are a few updates with the present stories in mind.

He's been a pirate, a king, and a squid-faced monster and recently returned from the dead. For all of the attempts to legitimize the character, none of them has really stuck and I always find myself drawn to the classic get-up as aquatic pop candy. I definitely looked to Michael Phelps for the swimmer's physique and Olympic spandex. 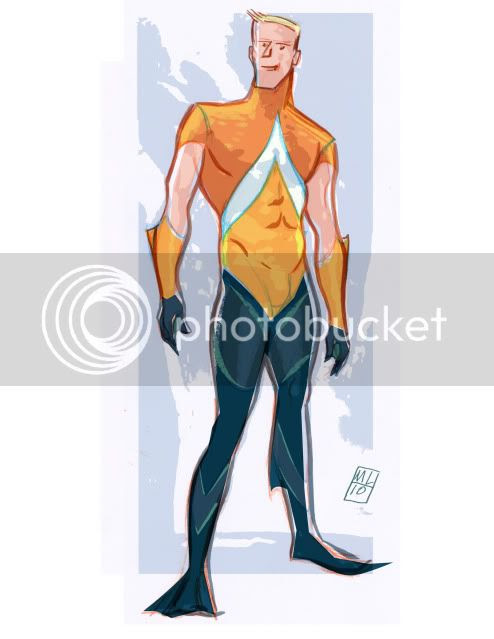 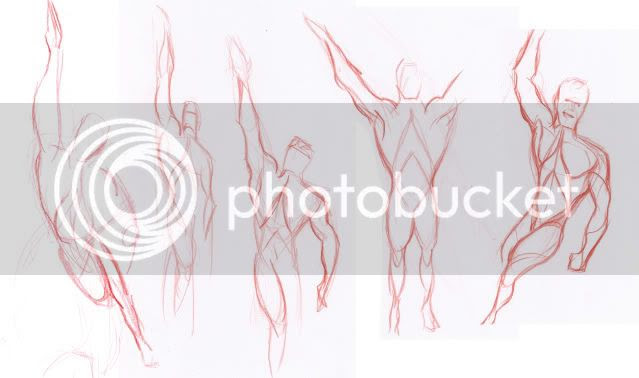 I get that she fought in WW2 but it didn't seem right to me that a Greek warrior princess would be decked out in the American flag. I tried to push the warrior aspect while swapping her eagle for a dove to point to the dichotomy of her mission (Warrior for Peace). I also tried to make her seem less Anglo and gave her a sentient lasso that has the hots for her. Oh yeah, and an Invisible Sword. 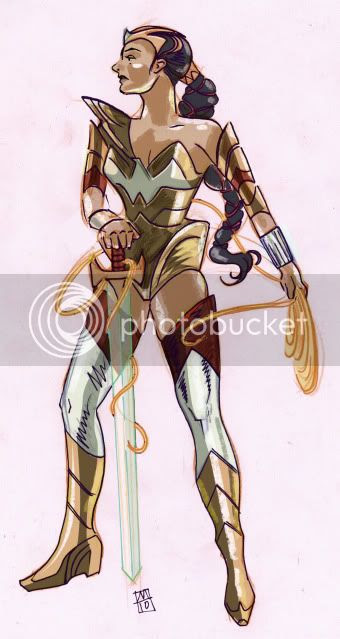 There's more than one Flash populating the DC Universe right now and I wanted at least one to have a different color scheme and symbol. Red and a Lightning Bolt is about as iconic as it gets but here I tried for a design with a sense of motion already built into the positive and negative shapes. I feel like it's the least successful of these three re-designs but a decent jumping off point for further exploration. 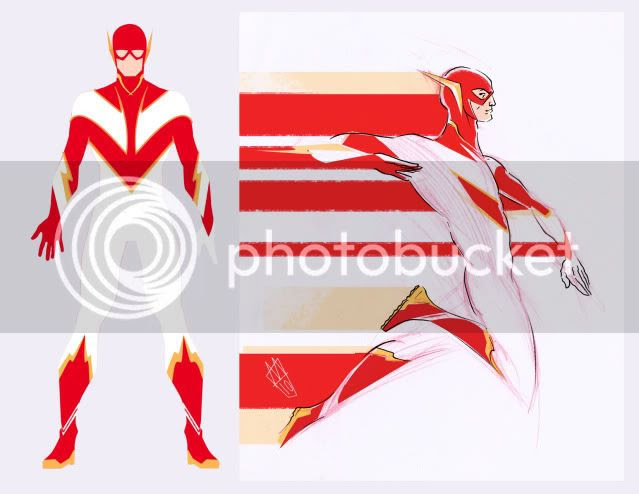 Posted by Michael Lapinski at 9:18 AM No comments:

Color's a very powerful thing, and I hate to see it squandered. I think there should be more black-and-white books, not only because they can work very well, but if you don't use color for a purpose, why waste the ink?
- Frank Miller

I believe color is used essentially as a packaging device, rather than as an integral storytelling device.
- Will Eisner

I'm not much of a draftsman. When it came time to design "Feeding Ground" I had to consider the tools in my belt and how I could best communicate the narrative visually. I've needed to hone my drawing ability to the task but the skill that came most naturally, the implement that I felt I could wield most expressively, was color. 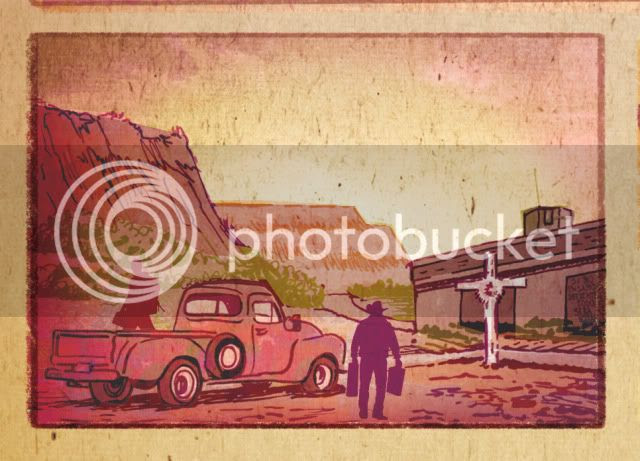 For a horror story taking place in the heart of the Mexican desert, I needed colors that would bleed and vibrate off of the page as if the ink had spoiled. Colors that are lurid and garish and feel a little sick. There are colors that describe what a thing is, be it skin, a sky, or hair. Then there are colors that convey a quality of light, from the artificial to the changing mood of the sun. Those are the colors of reality. My goal has been to combine those qualities with the emotional weight of color to create a world that feels simultaneously unreal and a more realized version of the place itself .

Coloring in mainstream comics has never looked more professional. Digital colorists can now create highly rendered forms and special effects akin to a summer blockbuster. But, at its best, this sort of coloring is an invisible art in that it conveys only what is on the surface.

Narrative color has been used recently by David Mazzuchelli in his Graphic Novel "Asterios Polyp." He follows a clinical formula with a limited palette of primaries and secondaries to convey emotions and mental states as directly as the time of day. He combines them to visualize invisible connections between characters in a visual language that is as stark as thought balloons or the written word.

For my tastes, Val Staples color work on "Criminal" by Ed Brubaker and Sean Phillips is even more inspiring for using bastard colors like mustard, mint green, and violet to elicit feelings from the reader. They aren't the "right" colors for, say, the restaurant setting of a scene, but they perfectly conjure the acrid ozone smell of electric violence in the air. 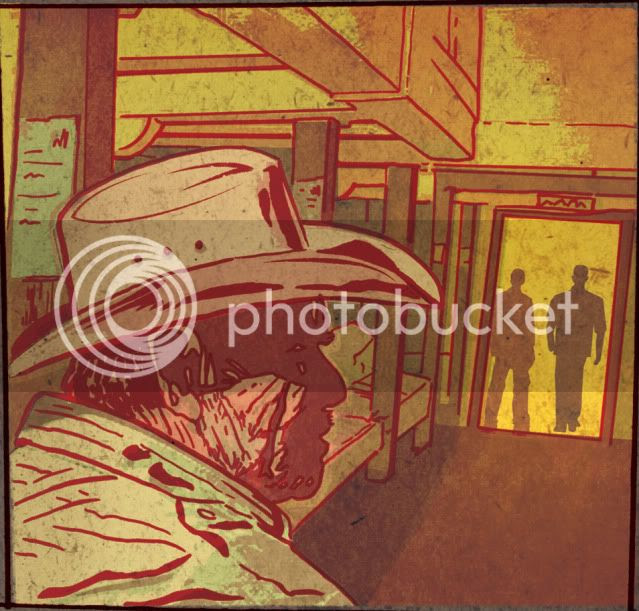 The color work in my book feels risky. I'm often doubting myself and arriving at solutions through accidents but that's what makes it art to me. The trick is that I need to know when to reign it in. I'm using color hold outlines, and overlays, and unnatural hues and it could all turn out to be a chore on the eyes if I'm not successful.

There was a point when my final black and white inked work looked like enough to me. With a little local color, it read fine and looked right. It was a safe option. But, we sold our pitch book with color that didn't compromise. I had to follow our initial impulse and chase colors that not only felt "right" but might cause the reader to see something new. 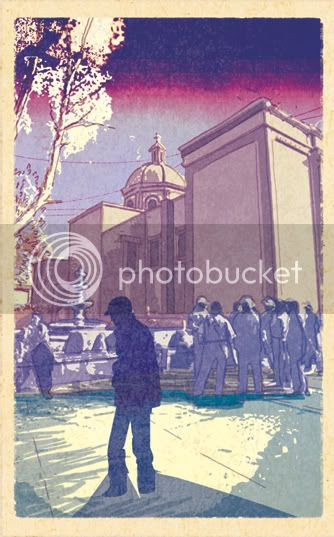 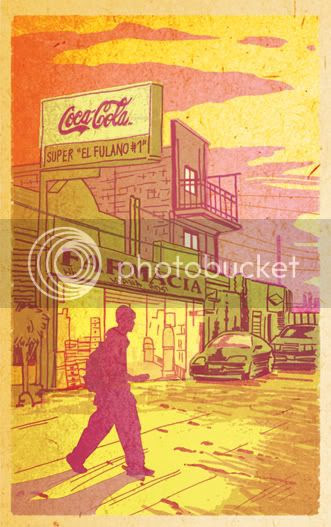 Note: the entire story is not told in silhouette. I had to pick images that didn't give up too much information and just noticed the common thread in all of these panels.

Thanks to cartoonist Donal Delay for bringing the featured quotes to my attention.
Posted by Michael Lapinski at 12:02 PM 2 comments: Apologies for the lack of more regular posting. I'm proud to say it was partly due to the time I've been dedicating to finishing the coloring and lettering of Issue 1 of my comic Feeding Ground. It's off of my plate and, this week, onto Issue 2...

I'll soon return to talking about the color of the book and please post any inquiries you may have.

Instead, I just came off a comics community weekend with a book launch party at Art Spiegelman's apartment (!?!) and the annual MoCCA festival and thought I'd give some insight into the logistics of making this comic happen.

Based on current reading and my experience at the MoCCA festival, the comics scene is more diverse that I've ever seen it. The tables and bookstores are populated with memoirs and historical work, the literary and the vulgar, art objects and genre fiction of all stripes. There were more women on both sides of the tables than at any comic event I've attended and the number of "fangirls" in the genre market also appears to be growing. All said, the comic community remains strong even as the economy wobbles. And yet, artists that make a grab at living on comics seem to face a low ceiling.

In terms of "Fine Cartoonists" just how much is a customer willing to spend on a photocopied zine or its more expensive cousin, the silkscreened art object, when book publishing has become glossier and more inclusive? Likewise, it was never easy to nail a full-time contract with one of the Big Two (Marvel and DC) but it's become even more difficult with the open pool of international talent now available an e-mail and file server away. And, what about me? What does it mean to work on a creator-owned comic in 2010?

In short, it pays nothing up front and every week is a balancing act of long hours of non-paying comic work alongside searching for and delivering on whatever freelance jobs I can acquire. I have cut my rent in half by moving from an apartment in Park Slope, Brooklyn to the first floor apartment in my family's two family New Jersey home. I've got my dog, cat, and lady but visiting friends has become the occasional outing.

Now, I'm happy with what I'm doing and appreciate the challenge. Comics have long been a love of mine and now I have the chance to develop that skill set and participate as a peer. But, at the end of the day, I can't say that this is a way to make a living.

As a career animation designer, I always looked for the opportunity to pitch my own ideas for series to different networks and studios. In part, I do feel like I have something unique to bring to the table but there's also that brass ring chance of escaping the freelance cycle and getting paid to work on something that is your own.

In the case of this comic, we could have gone the self-publishing route and we have enough faith in the material to do so. But, we were fortunate enough to partner with a publisher, Archaia, who believes in the medium and our work. I'm taking a chance that our book may sell enough to recoup some of my expenses but I also understand the time it will take to do so when divided up among all three creators. Comic purists also decry a perceived money grab at comics that are developed into other media like video games or film but I could only hope that our work is potent enough to capture broader attention.

There is the oft-repeated credo that cartoonists do the work they do out of the love for it and not out of a desire to get rich. But, what about basic compensation for the work done by comic illustrators on work that is not their own? Maybe someone else can shed more light on this, but, in an age when major book publishers all have a comic arm, are their cartoonists making enough to pay the bills? Anecdotally, I can tell you that it's not always the case.

I've had the pleasure to be able to meet with professional cartoonists whose work I admire. I won't pretend to understand the finances of book publishing but something seems to be amiss when these artists work for reputable houses for what amounts to less than a living wage. I'm not saying that there's necessarily anything underhanded at play. Comics are time-intensive, laborious work in which the "love of the game" is factored into the financial model.

In my case, I need to get back to working on Issue 2. And then, after that, along with the good people of Archaia, I'll also need to bust my butt to get out there and sell it.
Posted by Michael Lapinski at 1:11 PM No comments:

Labels: Archaia, Comic Business, Comic Events, Feeding Ground, MoCCA
Newer Posts Older Posts Home
Subscribe to: Posts (Atom)
Thanks for visiting PAWS AS HANDS, the personal art blog for Michael Lapinski, covering my work as comic book creator and animation art director. The blog was originally conceived as a HOW TO by a comic novice who was still learning HOW TO. Feedback encouraged. Cheers!