I recently had the chance to design the logo for Image Comics' preternatural thriller MIND THE GAP, in stores on Wednesday, May 2nd. Here's a Robot 6 interview with writer Jim McCann about the series and I shared the final logo design on my blog here. Thought it might be cool to go through the options that led us there.

During an extremely productive brainstorming call with Jim, we developed some governing principals and descriptive adjectives of a design that would communicate the story and compliment the art by artist Rodin Esquejo and colorist Sonia Oback. We arrived at three potential directions to take.

ETHEREAL
The story focuses on a woman, Elle, who is caught in the gap between life and death after an attempt on her life. Jim felt that the logo should use color to have an out-of-focus, shifting, ethereal quality to reflect the mental state. The blurring also suggests the movement of a train, recalling the platform on which she was shot. 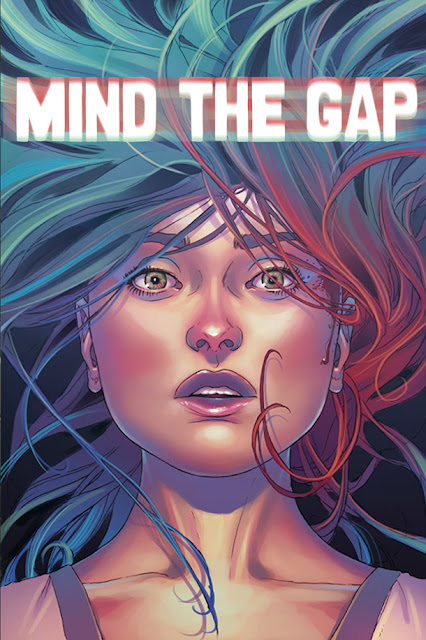 FRAGMENTED
The details surrounding Elle's shooting are a mystery and she is working to piece together the clues to identify her shooter and return to the land of the living. As such, I wanted to use utilitarian stencils, like those of subway notices, to create a logo like puzzle pieces that might take a moment to assemble at first glance.

WORLD-WORN
As a pulpy thriller, we also thought to try something that pulled directly from the grit of subway signage, literally the edge of the platform and figuratively at the edge of Elle's consciousness. 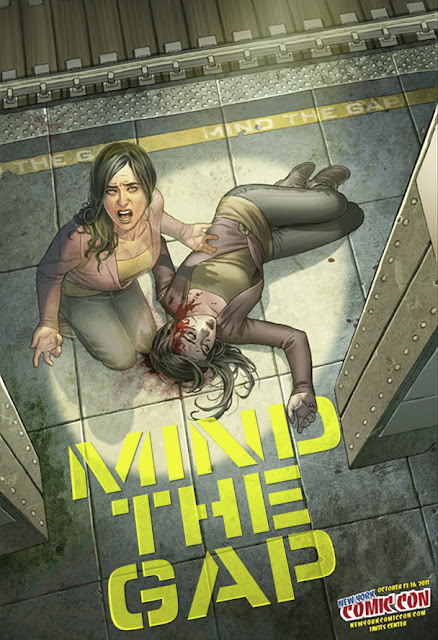 Although these were the three options we discussed, working on the mock-ups compelled me to try a fourth riskier approach that I internally labelled simply as "BIG." By blowing up the stencil as large as possible I wanted the gaps, the negative spaces, to be nearly as prominent as the letter forms. Then, by splitting the title on the top and bottom of the cover we were able to frame and compliment Rodin's art in unique manner and provide an inherent gap or pause in its reading.

I threw this option out there as a bonus, and, after some reflection and minor tweaks, it's the one that the MtG creative team ended up choosing. 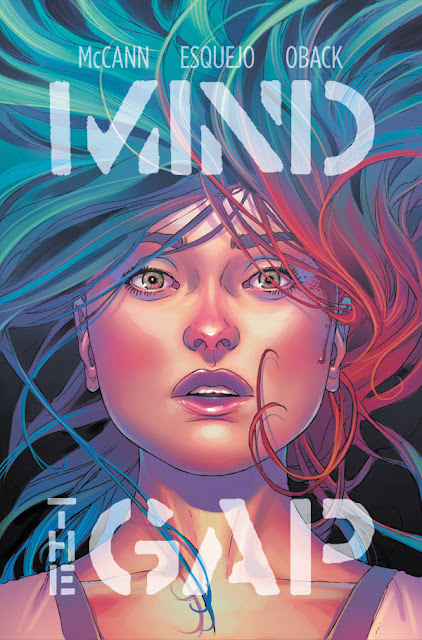 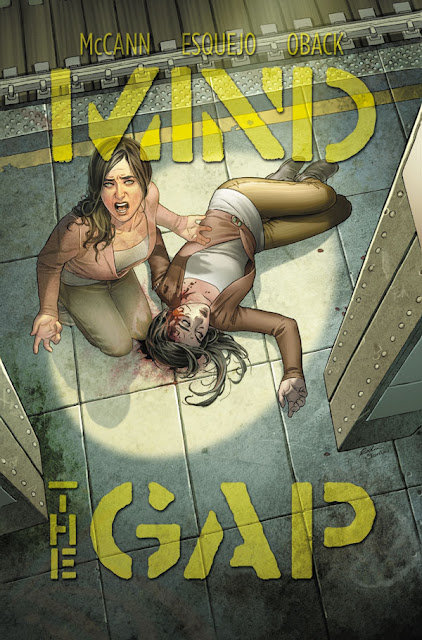 Posted by Michael Lapinski at 11:50 AM No comments:

With the Teenage Mutant Ninja Turtles back in the news due to the Michael Bay movie in development I thought I'd share some work from my days as Color Supervisor on the 4Kids Ninja Turtle cartoon. I just posted PART II HERE. 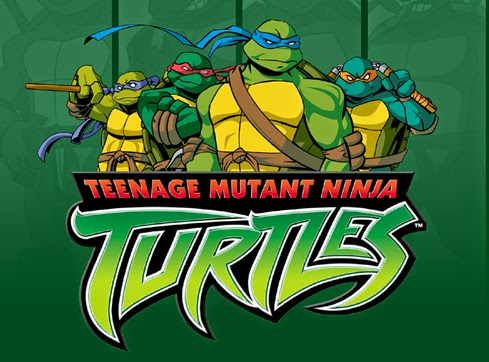 The palette for the show was established by Beatriz Ramos, owner of DANCING DIABLO studio and visionary artist in her own right. She was a thoughtful instructor and runs her business with a conscience and artistic integrity. My predecessor was Liz Artinian, one of the best animation painters in NYC. I came on at the start of Season 3 through the FAST FORWARD re-launch and I worked alongside crazy-skilled painters like Reginald Butler and Emilio Lopez.

Over the course of a few seasons, the director, Roy Burdine, and I kept pushing the cinematic potential for color, including the addition of special color treatments for characters and props for situations like Night, Underwater, and Firelight. Looked good, but a load to keep track of for production.

Below are some examples of color model coverage for certain scenes. These are the style sheets we'd send as reference to Don Woo Studios in Korea. We tried to communicate as much as possible in a few images. I also included video to show a comparison with the final on-air product. 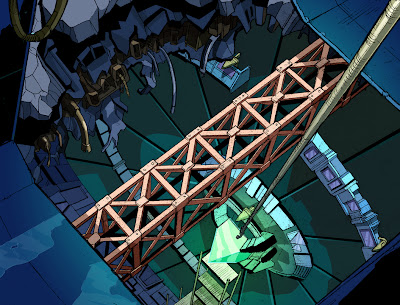 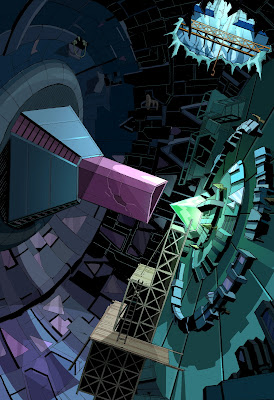 You can see this environment starting at the 40 second mark.

BISHOP'S AREA 51 LAB from "Aliens Among Us" 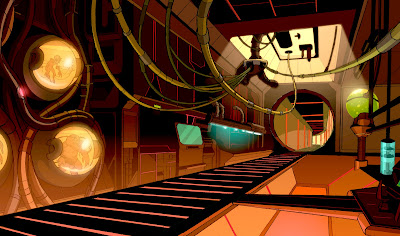 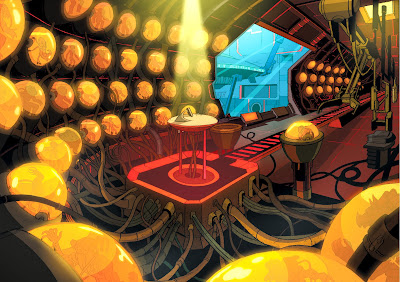 You can see this environment starting at the 57 second mark.


AIRBORNE CITY at Night from "Mission of Gravity" 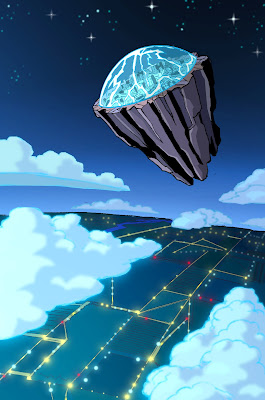 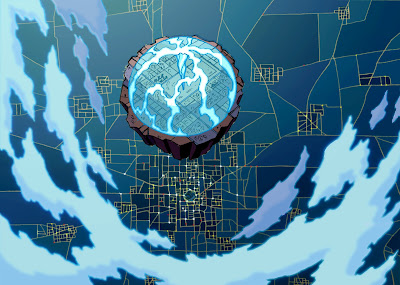 You can see this environment starting at the 35 second mark.

Posted by Michael Lapinski at 11:11 AM No comments:

Labels: Animation Design, Background Design, Background Painting, Teenage Mutant Ninja Turtles, TMNT
Newer Posts Older Posts Home
Subscribe to: Posts (Atom)
Thanks for visiting PAWS AS HANDS, the personal art blog for Michael Lapinski, covering my work as comic book creator and animation art director. The blog was originally conceived as a HOW TO by a comic novice who was still learning HOW TO. Feedback encouraged. Cheers!