"NOBODY CARES" - A Community Art Installation 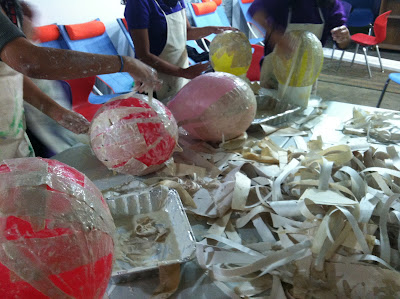 I recently had the great privilege to work as a teaching artist for a group of 7th and 8th graders as a part of the Frist Center for the Arts "Stop! Take Notice" community art installations in Nashville. To launch the program, we introduced 4 groups of teens and pre-teens from centers throughout the city to the socially-motivated art of the Carrie Mae Weems retrospective on exhibit at the museum.

Weems has created decades of art in the form of photography, on its own and in juxtaposition with text, that challenges the viewer on issues of race, gender, and our social fabric. In 2011, after the gang crossfire death of a 2 year-old in her neighborhood, she created Operation: Activiate, exhortations on violence (eg. "Killing a man doesn't make you a man.") that directly engaged with her community as posters, lawn signs, billboards, newspaper ads, and even matchbook covers at the local bodega. She helped establish "Safe Zones" where children who felt threatened could find haven. Art left the gallery and met reality head on.

For "Stop! Take Notice" we asked that the student artists discuss an issue that they felt had the greatest impact on their community and to create a public interactive artwork that fostered a dialogue about that issue. My group, from The Oasis Center, was the youngest of the bunch and yet we faced issues of mortality together as they wanted to delve into the impact that violence had on them. They introduced me to this aspect of their lives; what streets they can't walk down, parents moving their family due to repeated break-ins, and losing family members to gang violence. Their after-school teacher entered her line of work in part after discovering that a goofy high school associate of hers had grown up to become a now-imprisoned gang leader with a body count he would boast about.

And yet, they are still kids. They were quick and funny and absurd and caring and catty and loved their snacks. When it came time to give their experience a form they were utterly creative in their approach. Although I helped to continue the conversation, all of the decisions and direction were theirs over meeting once a week for several weeks. The artwork would be a piece that was a memorial to those we lost, the ways in which violence has taken from us, but also a memorial to the living, the potential loss we still face. It needed to be colorful to capture attention. Rosario proposed the idea of floating messages on balloons. No, how about fortunes in fortune cookies? Piñatas?

They would make piñatas. In the center of the exhibit would be a destroyed piñata of the Earth spilling candy as well a memorials to people and ways of life taken through violence. Surrounding the Earth would be a constellation of self-portrait piñatas of the students, fragile vessels also containing candy as well as slips of paper listing the qualities that the world would miss if that student were ever killed or ruined by violence. They would invite viewers to add messages of their own.

It was messy and fun and the group took pride in decorating their work. But the seriousness of the piece was always behind the surface. It was Guadalupe who reminded the students that they should consider those who have fallen, the loss and hurt they felt, as they took whacks at destroying the Earth. The kids also pointed out the inherent contradiction in doing so.

Last bit: what to call it? Inspired in part by a SpongeBob Squarepants online meme, the group decided on "Nobody Cares." Not intended to be glib, but, even surrounded with teachers and parents and community leaders that care about them, this is what they wanted to give back as a response to the violence they face and the potential they stand to lose. It was as smart and audacious as they are and we can only strive to meet their challenge in creating a world that they deserve.

I know teens and pre-teens often get a bad rap for being lazy and disrespectful. But, this group showed me how sharp and sensitive they can be. They had innate BS detectors and the way they joked with each other showed how much they "got it," digested it, and spit the world back at itself. Their teacher Vanessa cared deeply for them and they knew it. Even when they would get rambunctious they were hemmed in by their desire to not let her down. I am better for having met them and sharing in their lives if only for a little while.

Below are some pics of the process along with the exhibit write-up and the final installation. 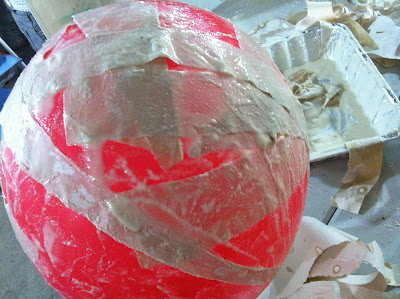 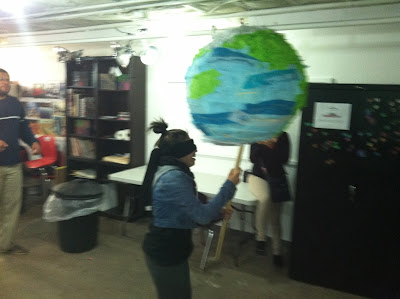 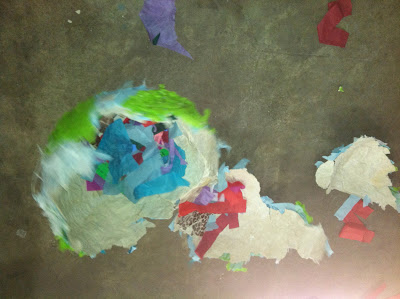 This interactive work of art was created as a part of the Frist Community Art Project: Stop! Take Notice! with the intention of connecting the surrounding area to themes present in the work of socially motivated artist Carrie Mae Weems.

The group of young artists at the Oasis Center chose to address the role that violence plays in defining their experience of their community. Each artist is represented by their own hand-crafted piñata, a vessel that contains not only candy but also documents that detail the unique qualities that they bring to the world; gifts that would be sacrificed if they were ever the victims of violence.

These piñatas surround the debris of a destroyed piñata representation of the Earth. The remnants include written messages about the impact of violence in the community and memorials for those we have lost to violence.

Please participate in adding to this artwork in two ways:

- You may write about your own distinct gifts on the slips of paper and insert them in the open piñata next to this sign.

- You may offer memorials to people who have been hurt and taken by violence or accounts of how violence has affected your life by writing them on the slips of paper and including them among the pieces of the destroyed piñata. 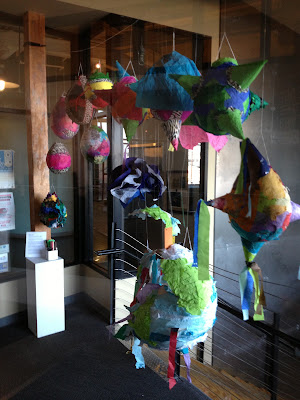 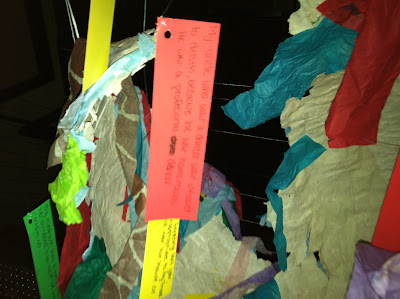 Only revealed to me after the breaking of the piñata, the above message stopped me cold. It reads: "My uncle who was a dancer was stabbed to death, because he was homosexual. He was a professional dancer." 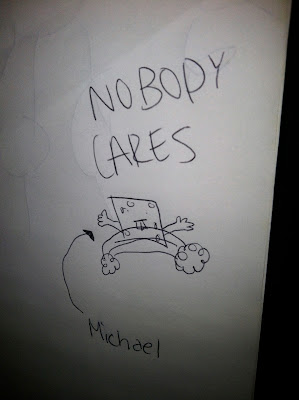 The above is me, as SpongeBob, by one of the kids.
Posted by Michael Lapinski at 8:59 PM 2 comments:

Labels: Art Installation, Frist Center, memorial, Oasis Center, Piñatas, teens, violence
Newer Posts Older Posts Home
Subscribe to: Posts (Atom)
Thanks for visiting PAWS AS HANDS, the personal art blog for Michael Lapinski, covering my work as comic book creator and animation art director. The blog was originally conceived as a HOW TO by a comic novice who was still learning HOW TO. Feedback encouraged. Cheers!