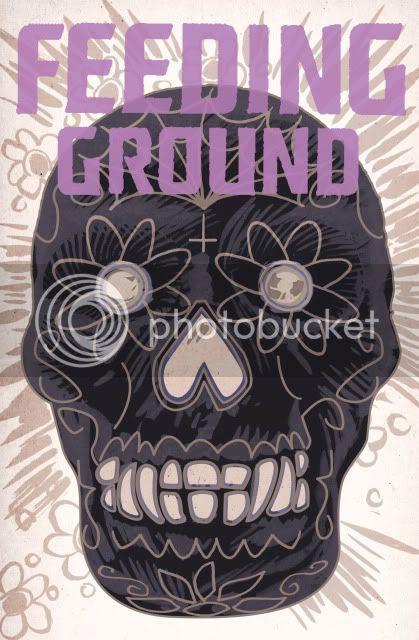 FEEDING GROUND #3 hits stores this week and Archaia has a Preview up on their website. The sequence offers a great glimpse of our re-imagined werewolf myth on the Arizona/ Mexico border.

This issue also features the first of many FEEDING GROUND pin-ups by guest artists. Below are peaks at work by:

Juan is inspiring and endlessly innovative and Tom paints the pulp of a lost ark of seedy paperbacks. We're lucky to know these guys and for them to bring their crazy skill to our characters.

We also teamed with Fast Custom Shirts to create Tee and Long Sleeve shirts based on the cover to Issue 3. It's set up so that you can choose the flat fill or line art version of the Calavera Skull Image in your own combination of colors. Please spread the word and check out some possible variations below. 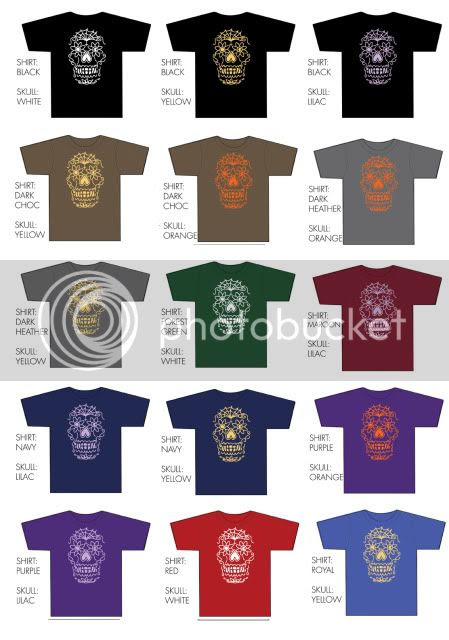 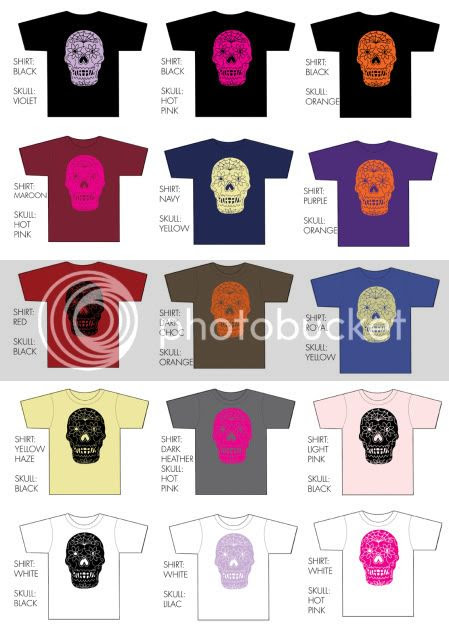 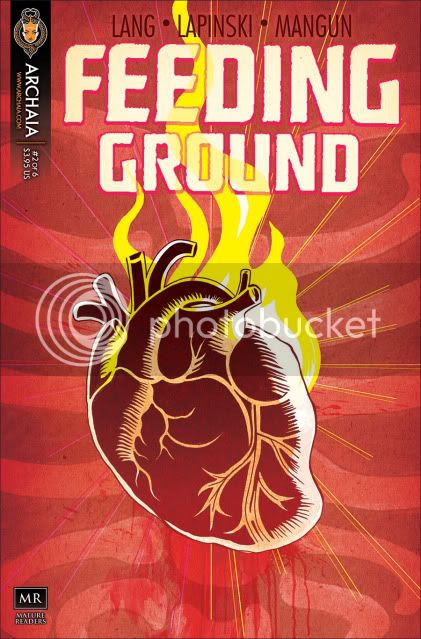 I got a nice surprise last week when the cover to FEEDING GROUND #2 was included on the list of the Top 50 covers of 2010 on the Robot 6 blog of COMIC BOOK RESOURCES. I still have last year's list bookmarked and I share the list with many of my favorite artists and images.

A child of the 80s, my taste in cover art/ design straddles the line between the narrative and iconic. To my mind, the best evidence of this is the Marvel work of Ed Hannigan. He was schooled by the greats but rather than lift a full scene from an issue (Spider-Man fights the Hobgoblin) he would choose the key moment that would make for the most iconic cover design (Spider-Man's fist raising Hobgoblin's mask out of the East River).
Speaking for myself, I arrived at a design scheme for the FEEDING GROUND mini-series that intentionally employs symmetry, bold color fields, and an isolated element to help distinguish the cover from the overall noise of the comic wall. Additionally, each cover is both a perversion of familiar Mexican iconography and a poetic counterpoint to the content of the issue. For Issue #2, the image is a visceral version of the Sacred Heart but also a comment on both the virus/ curse coursing through Flaca's veins and the act of her mother, Bea, burning down their home.

Whether or not I was successful is up to the reader, but, I at least wanted to give a sense of the thought process that goes into making these things.

Here are some of my favorites from the BEST OF list: 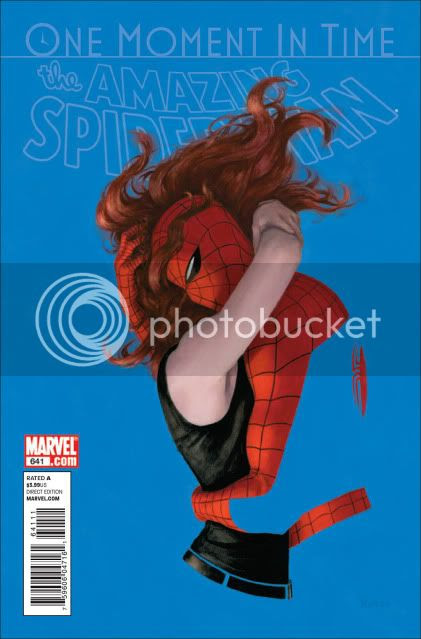 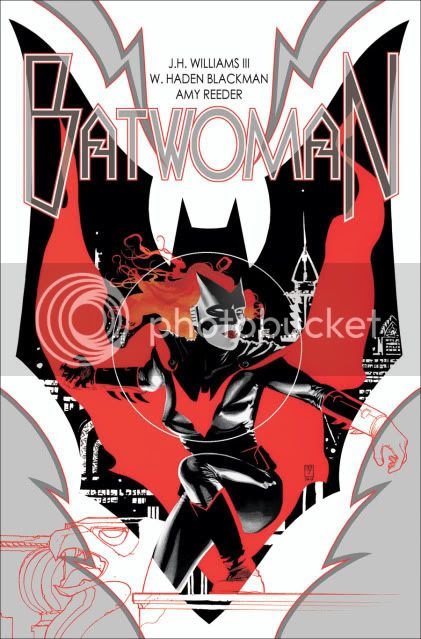 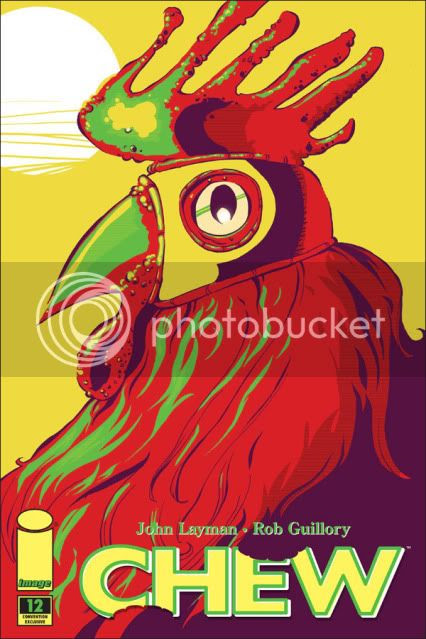 And, here's another peek at covers for upcoming Issues. Next time out, on a different story, I'd like to play with asymmetry and narrative as the covers demand it. 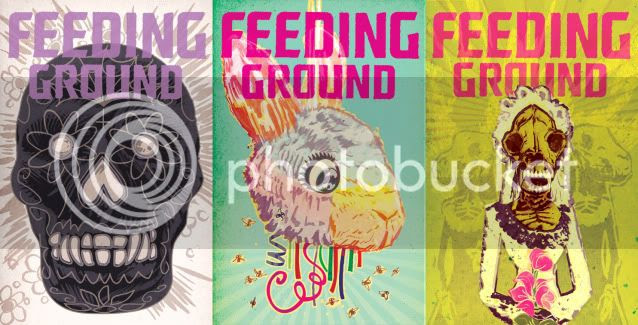 Posted by Michael Lapinski at 9:59 AM No comments:

For my latest freelance gig, I'm illustrating a comic adaptation of the AMERICANS UK's song "Sons of Ba'al" for their anthology ROCKTRONIC MIX TAPE #2 (now available for purchase online HERE!). Very cool to be a part of the 10th Anniversary of this band. It's my favorite song of theirs, mixing glammy Bowie swagger and Ramones goonish-ness at full throttle. Frontman/ writer Jef UK envisioned the comic as an epic biker battle.

Below you can see his descriptions of the characters along with my thoughts and initial concept sketches. I tried to subvert expectations and you can get a sense of how I tackled the assignment. Great collaboration and, like playing with action figures, it's the most "boy" thing I've ever illustrated.

My initial reaction was to undercut the badass by also making him seem a little goofy and laconic. A belly, biking spandex, and flip flops to enforce the idea that he doesn't give a meatball about what you think. 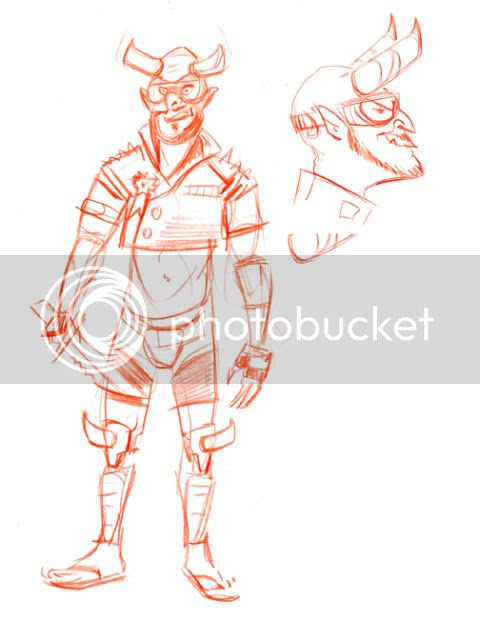 I think at the time I read the script I also I saw a documentary about killer wasps who were just brutal to their bumblebee prey. Rather than bulk him up I wanted JTR3 to be bug-like with slender arms. The visor is also taken from a robot that appears in Americans UK's ongoing comic series drawn by Paul Ciaravino. 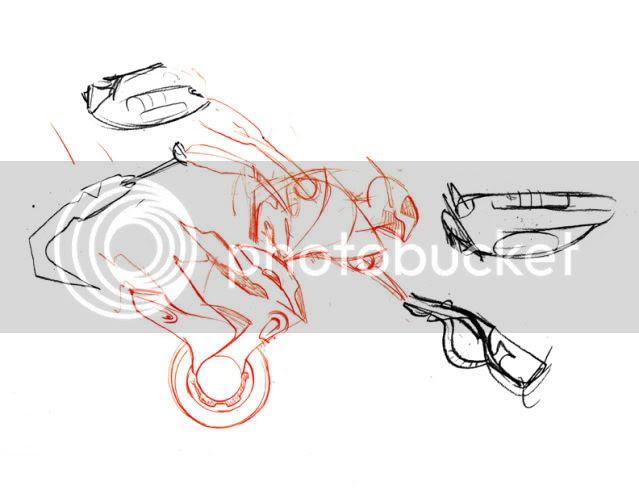 Hot Demon Chick—jet black hair, small horns, tall boots and small clothes. Tattoos galore. What a hottie. She rides in Jef UK’s sidecar, but usually by standing on top of it like she’s surfing, sorta. She uses a glowing laser Frisbee as a weapon, and has several hanging from her belt. I’ll call her Demona in the script.

I've never, ever, drawn "hot chicks" before. I plumped her up a little and drew the title as a tattoo instead of a leather jacket logo. The font is actually based on one my friend drew over and over in grammar school. At first I toyed with the idea of having her totally bottomless but the posing started to get weird when I had to be concerned about hiding her business. 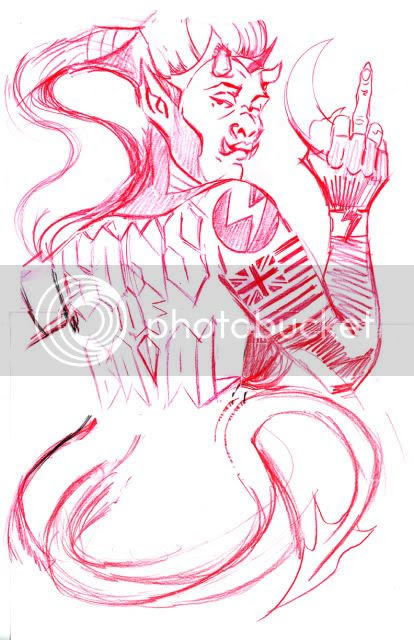 THE GOD GANG: the Sons of Ba’al’s mortal enemies.

I like Jef's description as containing conflicting imagery from different cultures. Rather than the white-bearded "God" I wanted him to have a dark, curly, Middle Eastern beard. He's equal parts Dr.Teeth and Brian Blessed from "Flash Gordon." 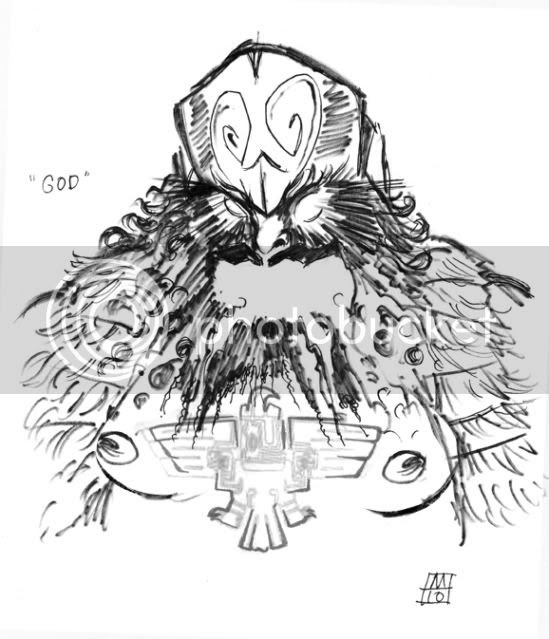 Death—Death is sleek, like a Japanese rider on a Japanese bike, fully covered in high end racing gear, all black, wears a black helmet with a skull painted on the visor, red eyes glowing through. He uses a hand held scythe as a weapon.

Done. With a ridiculously large scythe. There's so much phallic imagery in this thing. One detail that gets lost is that I want to the painted skull to be specifically based on the dimensions of a baby skull. It's all about attention to detail. 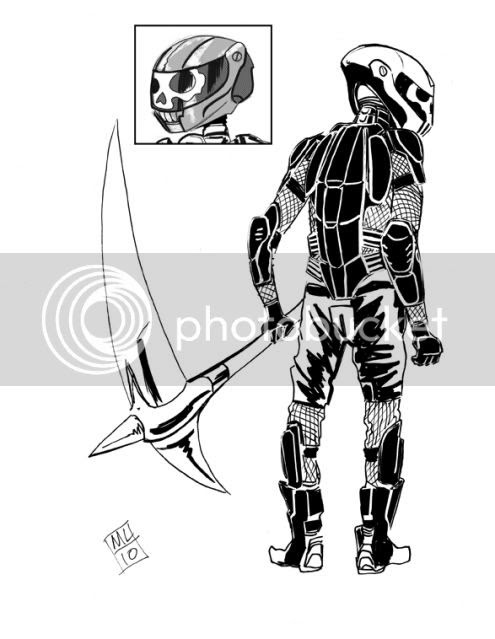 The Sea—the Sea is a woman. Her outfit and motorcycle should evoke the oceans somehow, sort of like a He-Man vehicle would. She has a trident strapped to her back.

Rather than a squid or mermaid sea monster, I drew inspiration from goblin sharks, deep sea anglers, shrimp, and eels. A few of my favorite things. 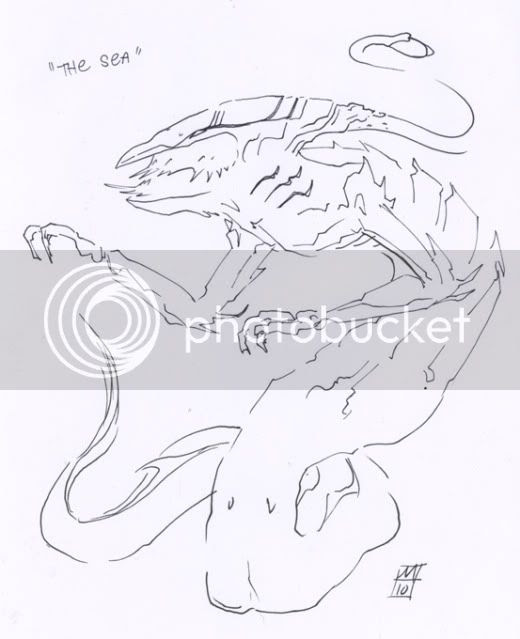 I should be wrapping up the strip next week and I'll give a holler when it's available.

Labels: Americans UK, Character Design, Jef UK, Paul Ciaravino, Sons of Baal
Newer Posts Older Posts Home
Subscribe to: Posts (Atom)
Thanks for visiting PAWS AS HANDS, the personal art blog for Michael Lapinski, covering my work as comic book creator and animation art director. The blog was originally conceived as a HOW TO by a comic novice who was still learning HOW TO. Feedback encouraged. Cheers!