DOING IT TO COUNTRY SONGS - Backstage 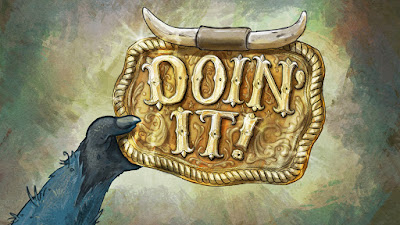 For about two weeks of my life, I was consumed by a country song. Specifically, DOING IT TO COUNTRY SONGS by Blake Shelton & The Oak Ridge Boys.


Magnetic Dreams producer Jeff Galle pitched the concept of Blake and the Oaks as country critters living and loving around a local watering hole, Lake Shelton. When we landed the job, one of the few notes we got was that Blake needed to be a deer. Blake Shelton loves deer, he thanks them on every album. And, although it’s no easy task to caricature someone as a deer, Blake Buck was born. 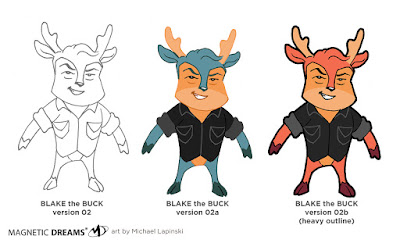 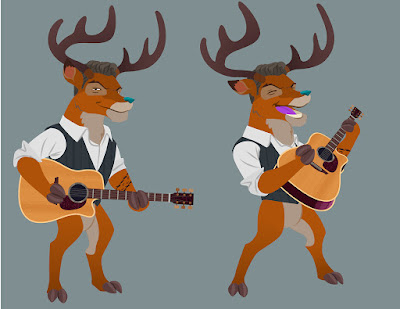 I’m grateful for the opportunity to shepherd this project on an incredibly tight turnaround at the service of country royalty, a devoted fanbase, and this cheeky barroom tune. I did a little bit of everything on the spot, from creating the narrative and look and Blake to peppering the place with easter eggs, but the real thrill was to captain an A-Team of talent in getting it done. Thanks to Mike Halsey and Don Culwell for bringing us all together.

Full credits and links below along with my favorite contribution from each artist. 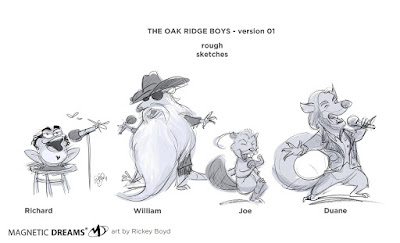 Character Designer
Rickey Boyd - Fun fact: Rickey once designed animatronic animal versions of the Oak Ridge Boys for a proposed theme restaurant, but that’s a story for him to tell. Here, Rickey designed most of the characters, immediately capturing the Oaks but also lending a sultry charm to our lady skunk that I didn’t know he had in him. 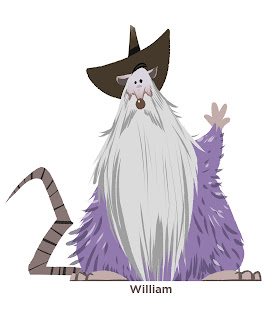 an unused version of William by Ben Fosselman

Designers
Trea Bailey - My right hand on the project, Trea did finishes on characters and especially made his mark on the crowd and his final version of Ol’ Red the bartender.
Ashley Malone - That moose! The utensils on the antlers is a sight gag that still makes me nod when I see it.
Kimberly Cranfield - She owned the raccoon, in all his underlit glory. 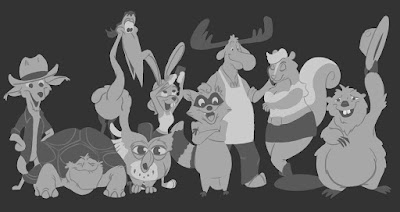 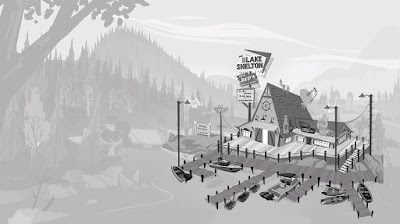 detail of the exterior BG - I wanted to show off Joe's boats!

Background Designers
Joe Spadaford - I knew I needed a background designer/ painter who could own the exterior. Joe created a centerpiece for our video, even though he had never worked in the style before.
Amanda Wood - Mandi painted all of those Bill Wray-inspired detailed DOING IT stills. In the thick of things, when I received her painting of the buckle, I knew we had our key art and the heart of the piece.
Michael Lapinski - hey, that’s me. I was just pleasantly surprised they let me ride with the John Hubley meets country-fried Samurai Jack style I cooked up. 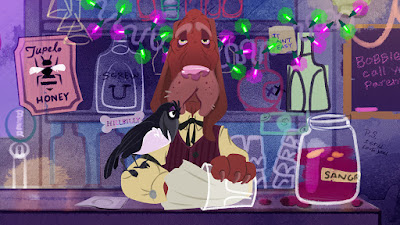 Animators
Kimberly Cranfield - Kim and Ashley pulled double duty on this. All-Stars, both. Kim really brought the raccoon to the forefront as the bar’s soul.
Ashley Malone - Although she brought a sly charm to the Oaks, its her spastic chattering of Joe Beaver at the end that never fails to make me smile.
Shin Matsuda - Shin hadn’t done much character animating before but man did he ever nail that smushy slow dance buckle grind.
John Hill - Fire! Once I knew we would have John on the piece I had to have him animate the few EFX we had.
Ben Fosselman - I couldn’t imagine doing this without Ben on it and luckily we got him long enough for some Crow meets Hound romance and Richard Frog’s post-show snack. 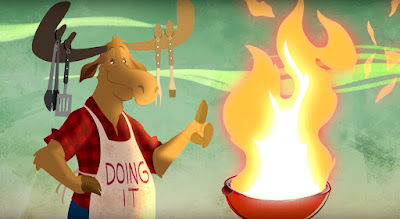 Compositing Supervisor
Rhea Borzak - As always, everything flows through Rhea and it wouldn’t get out the door or look nearly as good without her. But, it was her late addition jowel jiggle to Ben’s hound animation that I applaud her for.

Compositors
Shin Matsuda - blazing fast as a compositor but now I want to get him character animating again
Joel Robertson - with more than a few music videos under his belt, Joel livened up our camera and delivered on the red light scene change in middle of the piece. 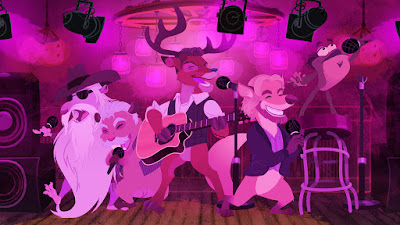 Thanks team, thanks Blake, thanks Warner Music, thanks Lindsay, and, most of all, thanks to the deer.
Posted by Michael Lapinski at 12:14 AM No comments: