After a brief break, Sesame Street is airing the remaining Elmo the Musical episodes for Season 43. As with any production, I feel like the team at MAGNETIC DREAMS STUDIO continued to learn and improve upon our computer-generated environments and animation over the course of the season, including a fully CG-animated character in the form of a stinky-breathed Dragon in PRINCE ELMO THE MUSICAL.

This week's DETECTIVE THE MUSICAL (Thursday 2/14) was actually one of the first scripts that I did development art for. You can see in the following collection how I experimented with a more graphic, abstract, rendition for the show (the bottom row, along with the SEA CAPTAIN pilot) that was ultimately surpassed by the fully-realized sets of the top row. 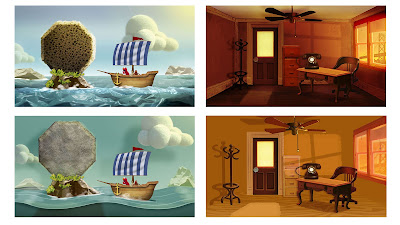 Below is a closer look at the Muppet Noir concept art for the episode's motel room (design by Astrid Riemer and additionally lighting by me, final models by Tim Crowson, lighting effects by Josh Stafford). Correct me if this isn't the seediest set in Sesame history...

An arty inside joke for the older kids (and adults), we needed to add some motel art so I digitally painted a Cubist still life to accompany the episode's math curriculum about cubes. 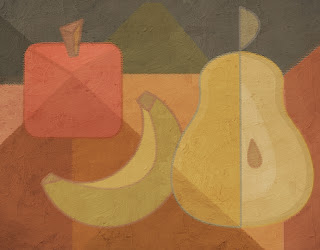 DETECTIVE was one of the few episodes where I did concept art for scenes that were eventually cut for time. Although we do feature a felty femme fatale and a cube criminal with a signature trait, the show almost also originally featured the streetlight lit encounters in dark alleys and on foggy docks that also populate classic Film Noir. 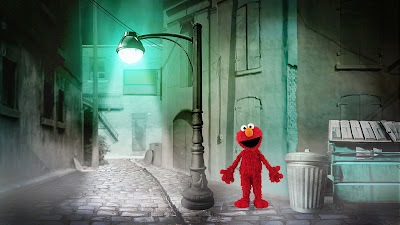 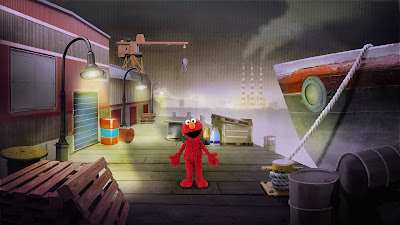 PRINCE ELMO THE MUSICAL (full episode online along with web games HERE) is our epic journey of an episode with our largest sets and a number of complicated effects and models (like an undulating, burping, Hill of Beans - models by Brad Applebaum and Lyn Lopez, effects by Abdel Pizarro). I added a pretty prominent Easter Egg homage for old school Sesame Street fans. See if you recognize it and then check the video at the end of the post. 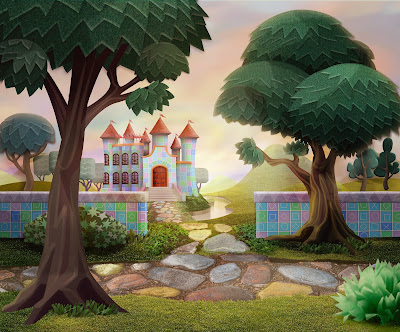 Posted by Michael Lapinski at 12:47 PM No comments:

Labels: Art Direction, Concept Art, Easter Eggs, Elmo, Elmo the Musical, Sesame Street
Newer Posts Older Posts Home
Subscribe to: Posts (Atom)
Thanks for visiting PAWS AS HANDS, the personal art blog for Michael Lapinski, covering my work as comic book creator and animation art director. The blog was originally conceived as a HOW TO by a comic novice who was still learning HOW TO. Feedback encouraged. Cheers!