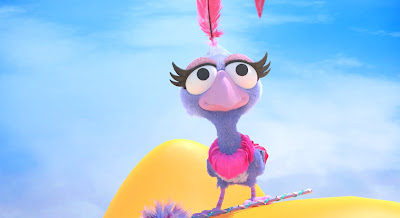 I got to design a Muppet! Anyone that knows me knows that Sesame and Jim Henson were essential to my becoming an artist. After several years of Art Directing for Sesame at Magnetic Dreams, the opportunity arose to design the fully CG antagonist for the new TV special, THE MAGICAL WAND CHASE. The movie was a fantastic adventure for the Sesame characters to leave the Street and visit other diverse neighborhoods.

BIRD DESIGN
The character, voiced by Elizabeth Banks, was written as a hapless villain who mistakes Abby's wand for a stick and triggers magical mayhem as the Sesame friends attempt to retrieve it. She needed to have a distinguishable pink head feather, but, beyond that, the design parameters were fairly open. Here's the sketch that led to the final design, chosen particularly because of her small stature and innocent gaze. 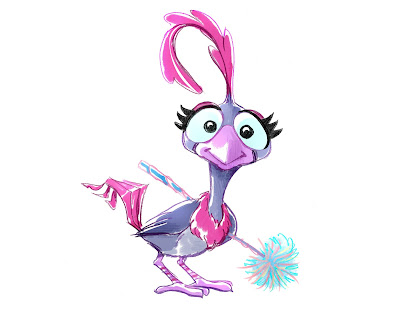 Creative Director Rickey Boyd and I worked up a book of designs for Sesame to select from. I tried different varieties of Muppet anatomy and felt pretty strongly about making her a lavender that would find its place in the rainbow palette of her six Sesame pals. Here are some unused designs: 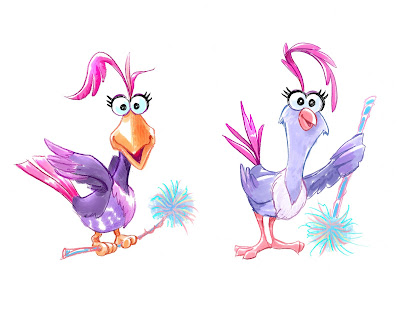 FRONT and SIDE reference for the modeler. 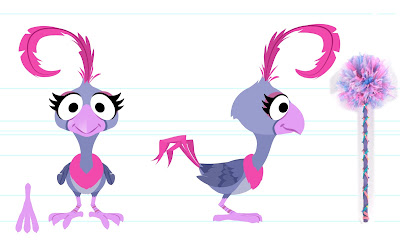 Surfacing reference for texture artist Joe Jones, who did an amazing job feathering with Ornatrix and capturing the fine detail of foam and fur. 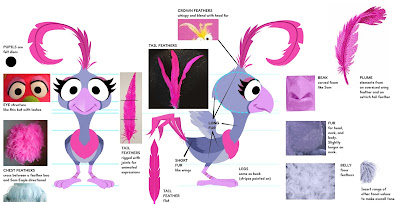 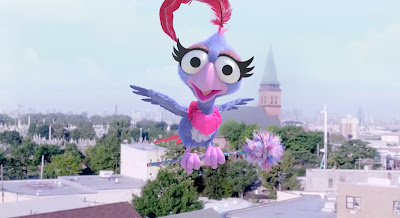 Rickey's also a Muppeteer and, with rigger Steven Alley, donned a glove to create a mo-cap performance of the Bird with nuanced head and lip synch and with all of the immediacy of a puppet. Our animation team (Jamie Coakley, Beau Sherman, Ben Fosselmann) continued to bring her to life as scenic and comp were responsible for the hot air balloons and CG city. The focus of my role on the project ended up being primarily on logo and opening and closing credit design.

The working title for the special was "Get That Wand" which I liked for its call-to-action kinship with "Follow That Bird."

I was inspired both by the construction paper art of the reading nook on set and also the "Around the World in 80 Days" hot air balloon focus of the Special to arrive at this final design.

I have the artist pack rat tendency to not throw away anything and the construction paper in the background is actually aged and bleached almost 20 years in my art supplies from college. 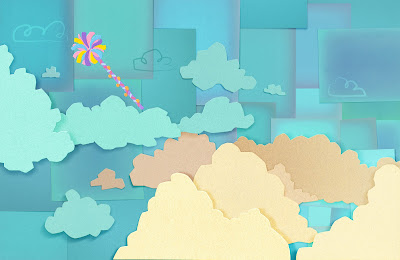 After arriving at the cut paper look for the titles, I discovered that Sesame already had a similar style in their consumer products guides. I made sure a few fan-favorite characters found their way into the opening airplane.

For the closing credits, I was inspired by Pixar to continue the story in the moments after the final frame. It was important to me to reunite the friends with Nina, introduce her to the Bird, and let the rest of the neighborhood have their own sunset balloon festival. Rickey lent his hand to a number of these designs and Ashley Malone was my right hand in finishing them off and animating these shots. 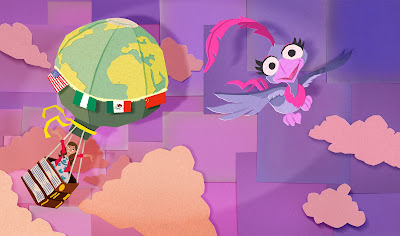 This last frame was a treat to design as a coda to the Special and, hopefully, a chance for us to get to revisit our new "Elizabird" friend on Sesame Street. 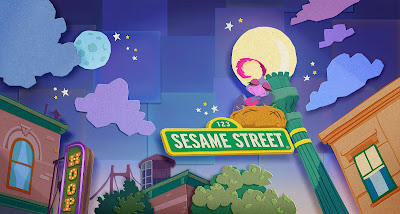 Posted by Michael Lapinski at 11:07 AM No comments: