Although FEEDING GROUND doesn't come out until September, writer Swifty Lang and I were invited out to San Diego Comic Con by Archaia to sign posters at their booth, participate in the Archaia: All-Access panel, and enjoy the big show.

There was much to get my inner fanboy excited (the Walking Dead booth, TOYS!, all things Thor) but it was a great occasion to meet the extended Archaia family and talk with some of my favorite creators. Everyone could not have been nicer or more down to earth. 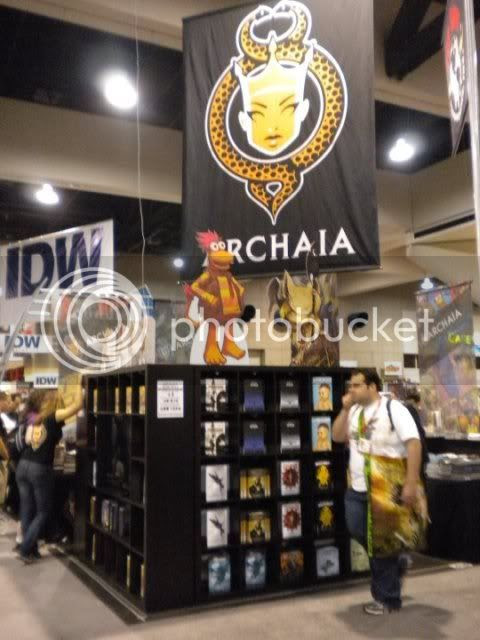 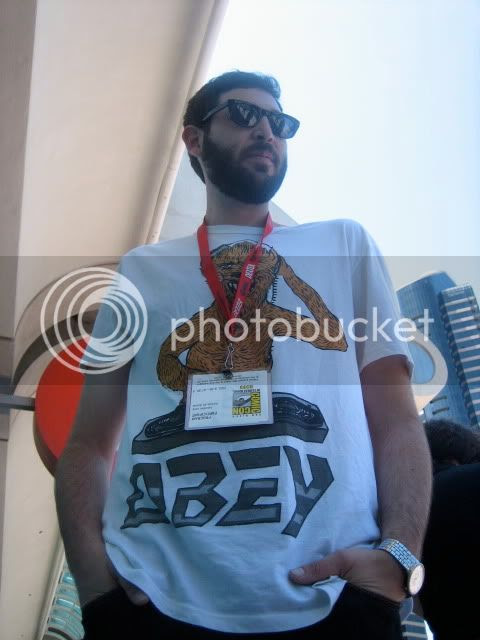 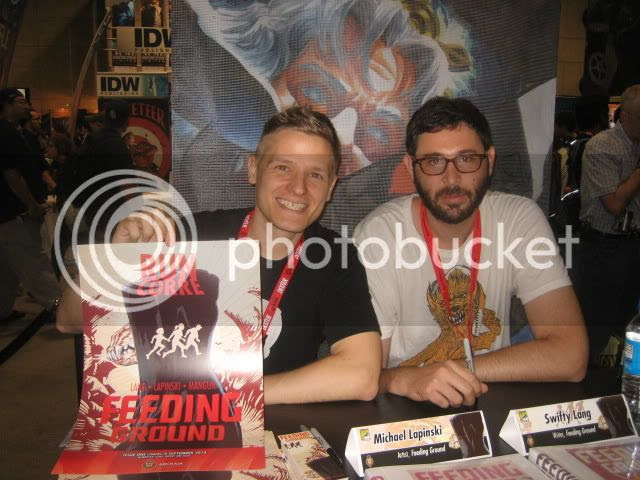 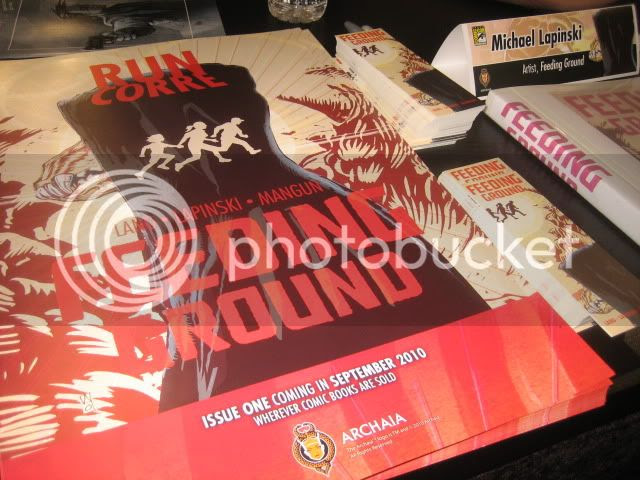 Some other highlights below:

- The Silkscreen Poster Art of Gary Musgrave and Jordan Crane. If anyone is ever looking to get me a gift, simply add all of them to your shopping cart. Such a vibrant aesthetic and powerful images that inspired me to push my FEEDING GROUND work even further. There is always something out there to remind you that you can always do more. 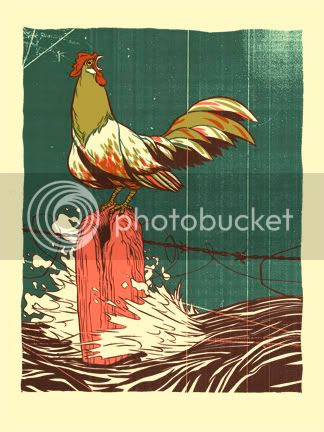 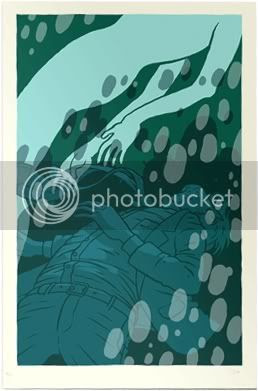 - The "Quickie" postcard and order slip art of David Palumbo. Dave's a meticulously talented fantasy painter but his looser ink work and figure studies have real life to them and show off how much he just "gets it." 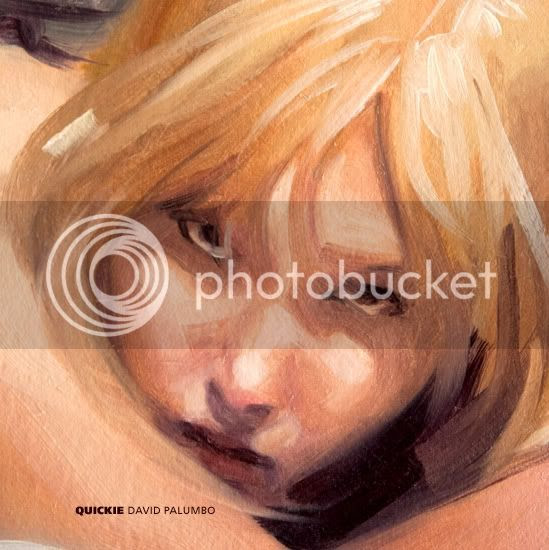 - Constructive criticism from artist Steve Lieber (Whiteout, Underground). Swift and I were honored to start our Con by chatting with Steve and receiving a critique of our work. A student of The Kubert School and great comics in general (check out Alberto Breccia) he is the consummate comic storyteller with a full command of the devices of the medium. Whether the frozen wasteland of Whiteout or the flooding cave system of Underground, his site-specific environments were a major influence on how I approached rendering the desert of FEEDING GROUND. 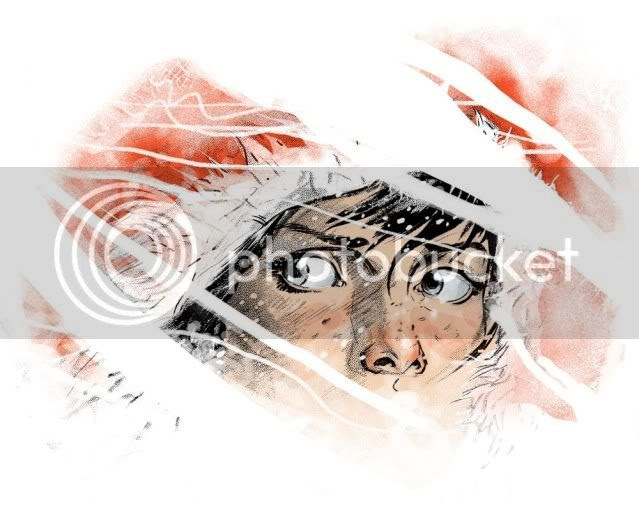 Some of his feedback:

1) Always draw each figure in a pose that creates a clean and interesting silhouette with clear information. For example, although I wanted the man below to be hiding the fact that he is removing bullets from the gun, I should have rotated the figure or camera so that the gun was free from his body and created a distinct outline. 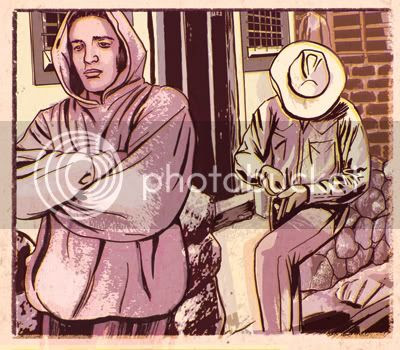 2) Be wary of placing figures with different horizon lines and creating a tilted stage. Staging figures in a believable space is definitely a craft I am trying to work on.

3) Feel free to occasionally drop background information from the panel. Although I have been diligent about rendering and establishing a real space around the figures, removing it also allows breathing room and encourages the reader to complete the scene in their mind.

In the end, much appreciated and Steve was also cool to give us a shout out on Twitter calling FEEDING GROUND an impressive debut.

All said, what an incredible professional and fan-lovin' experience that few media can foster. 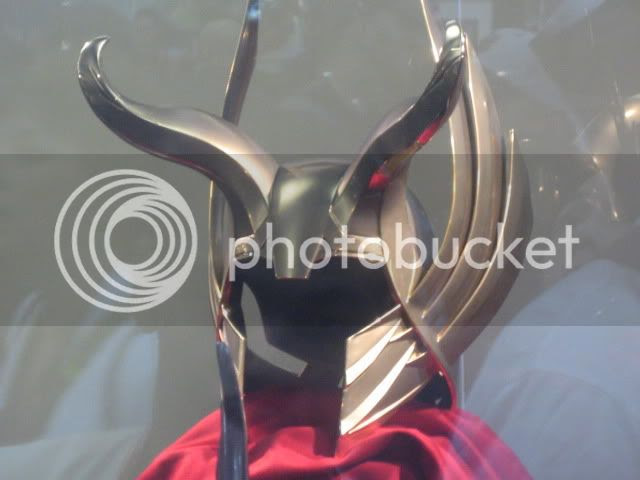 Posted by Michael Lapinski at 8:40 AM No comments:

Faithful readers of this blog might remember mention of a horror short called FROZEN DARK.

Swifty, Chris, and I created it for a black and white horror anthology edited by friend and co-worker Rick Ritter. Based on a story by Chris, FROZEN DARK deals with that common childhood fear of having to make a midnight trip to the bathroom, except this tale is set in the frozen wasteland surrounding a Tibetan orphanage. 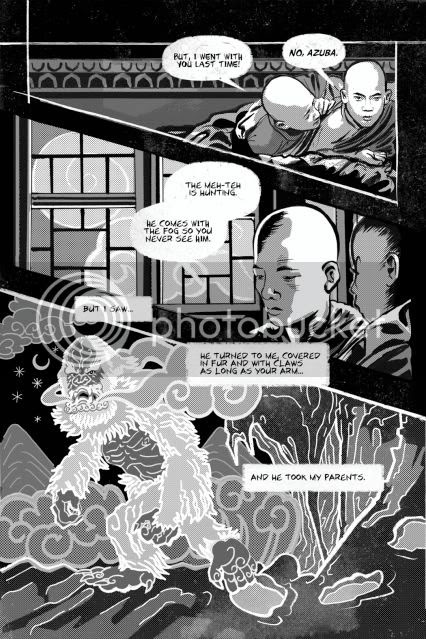 Now, Rick and cover artist David Palumbo are bringing a pitch book of the anthology (titled DON'T LOOK!) to San Diego in search of a publisher. The book also features stories from other NYC Animation heavyweights Bob Algeo, Paul Zdanowicz, and Scott Cooper. 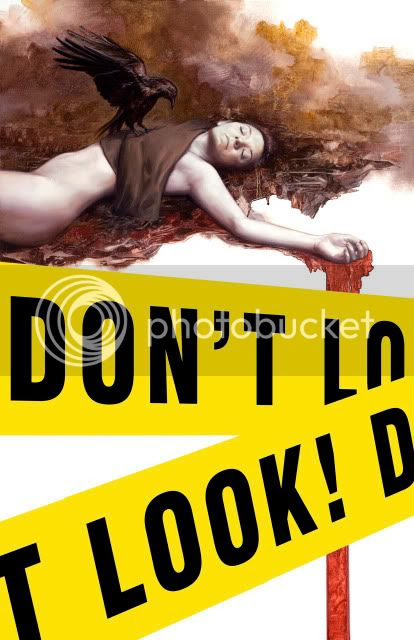 Now that the FEEDING GROUND release date is fast approaching (end of September) I thought I'd cover the structure of our initial pitch. You can go back to some of my earliest posts to take a look at some more of the content pages included in our Pitch Book.

The first thing we decided was to format the pitch as a comic with cover art and the same dimensions and binding as an ordinary floppy. Any tips we had researched always recommended the inclusion of 5 pages of comic content so this package seemed like a natural fit. 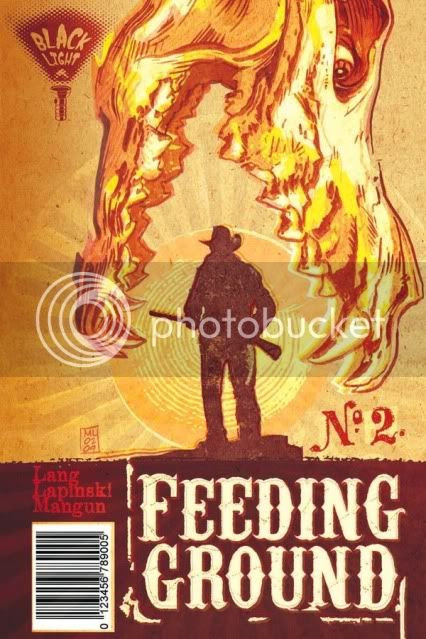 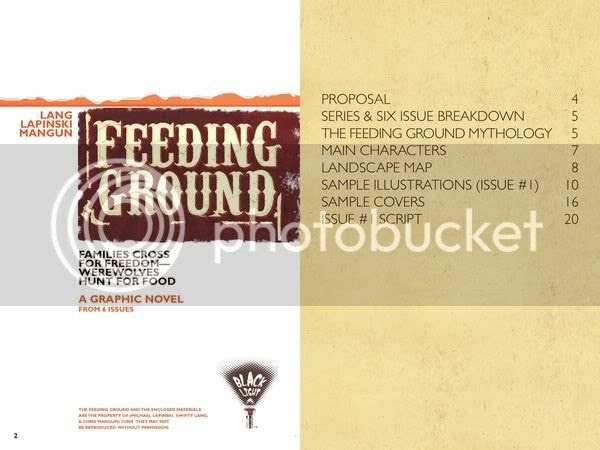 After a title page and table of contents, we immediately went into our proposal. It essentially starts with a two-sentence summary of the concept as a hook, then expands into a one-page description, and, finally an issue-by-issue breakdown on the next page.

We treated the text like any conversation with a stranger. Pique someone's interest at first, and then have the information to merit their attention. And, one important tip we were given was to tell your prospective publisher the ending. Mysteries are good for the reader but most publishers would want to know exactly what they're signing on for. 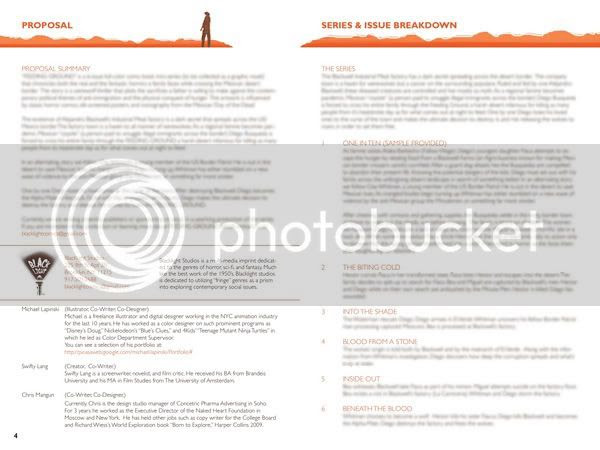 Also, mythology is not the story. While the story has a beginning, middle, and end, we chose to include a separate page about the overall mythology we were establishing because we felt it was a unique angle on a familiar topic.

From there, we had a page of character sketches and bios and a map to start to populate the world in the mind of the reader. That leads to the section that represents 5 pages of finished material. Of these pages, only one has made it into our final book relatively unchanged. However, an editor will be able to judge basic storytelling ability and execution based on these pages. Additionally, we included a few sample covers to communicate the identity of the series as it would appear on the racks. 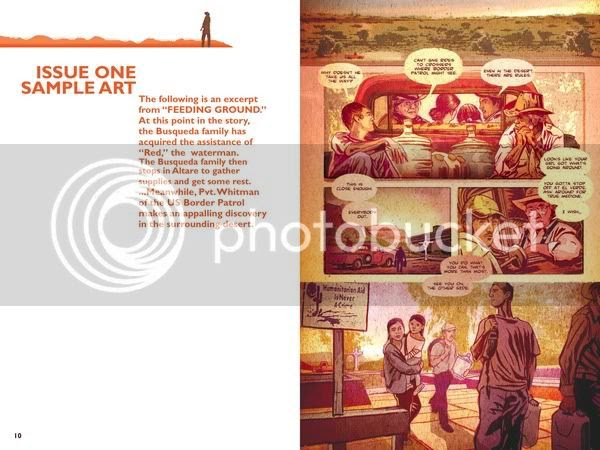 Finally, we ended with the full Issue 1 script as well as some additional pin-up art. Unlike screenplays, comic scripts do not require particular formatting but Swifty followed a general screenwriting model. Not required, but we also chose to add panel breakdowns for each page. 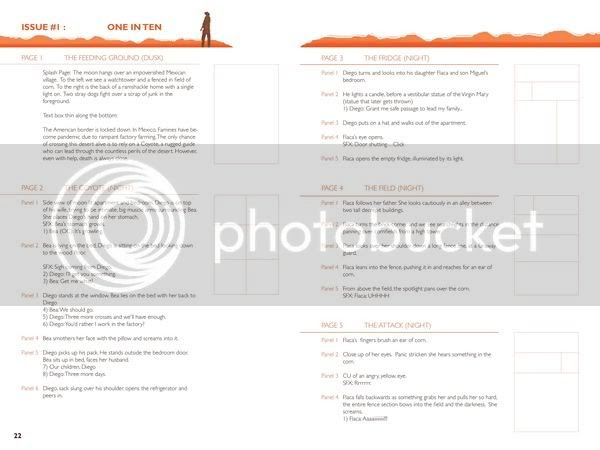 There isn't any one correct way to present your ideas, but, this is the one that worked for us.
Posted by Michael Lapinski at 11:53 PM No comments:

CHICKIEPOO & FLUFF _ The Evolution of CUTE 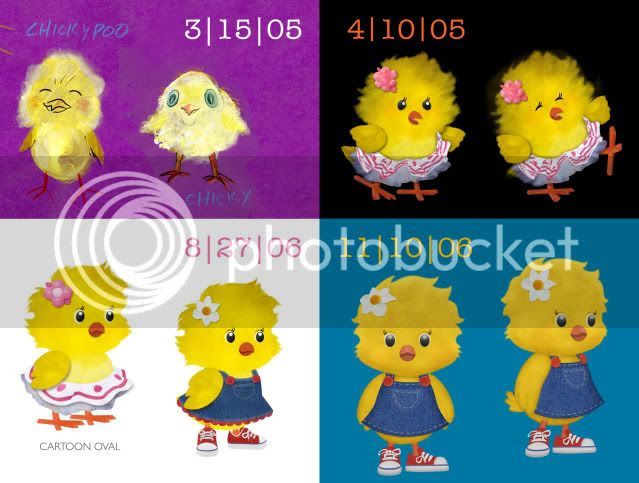 Presented for the first time, I would like to take you through the evolution of the character designs for the Nick Jr. animated short and series Pilot, Chickiepoo & Fluff: Barnyard Detectives. Solely based on my recollection, but, hopefully, this will give a sense of the time, work, talent, and many hands that went into their creation. It takes a lot of effort to look this cute!

When creators Amy and Liza Steinberg first asked for me to take a shot at visualizing their concept, I remembered a chickie doodle I had done for a friend with cel paint at the old Jumbo Studios.

My idea was to communicate that sense of "puffballs with life" by using a spontaneous fingerpaint technique. It really helped me capture the spirit of the characters and, of the designs, the baby brother Fuzzworth remained largely unchanged all the way through production.

It wasn't exactly what Amy and Liza were looking for, but enough to go forward and develop further. 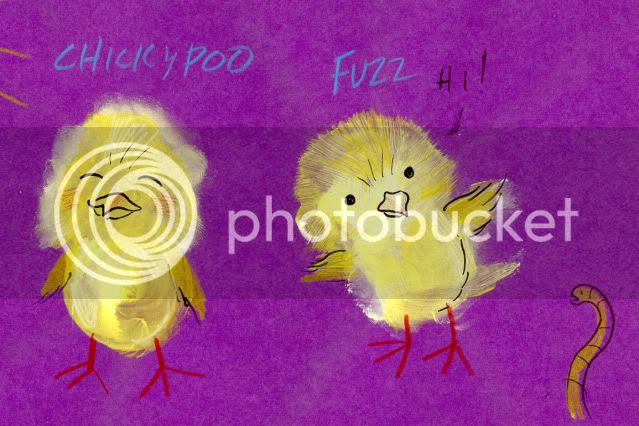 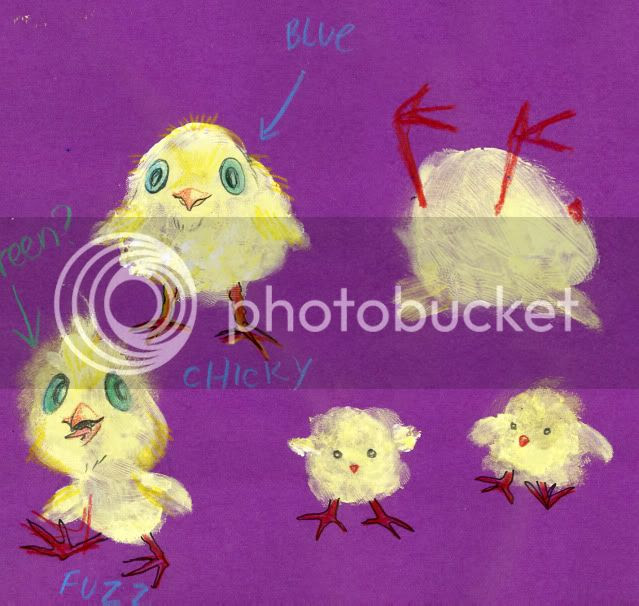 As I mentioned in earlier posts, I appreciated that the Steinbergs had complimentary tastes. Amy had brought pastoral, magic hour, baby animal reference while Liza preferred flat, Eastern, "children's book" art. More than that, they are connoisseurs of cute and had a shared vision for their chicks.

At this point, I started to use a digital collage technique similar to one we employed on Blues Clues. My friend and co-worker Scott Dodson coined it "2d-3d." With scanned textures from those pipe cleaner chick and actual swatches of fabric, the chicks started to get dressed and take shape. This is the way they were presented in the pitch book and the way they existed for some time. Although they seem a little raw to me now, they have a spazzy energy that I adore. 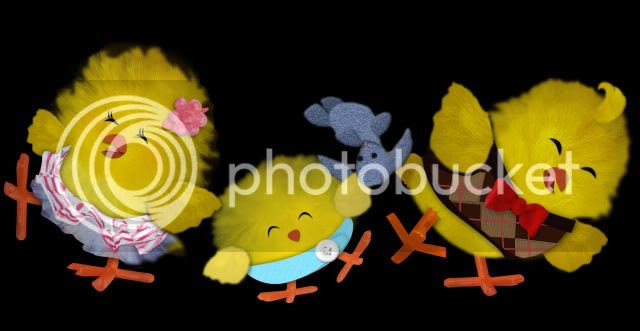 After the concept was picked up for Pilot production, we had meetings throughout the summer to start to refine the story and designs. I can't do justice to all of the variables and iterations that were brought to the table. In design only, some include: wardrobe, beak shape, eye type (scelera or not), footwear, proportions. The production team, including Jennifer Twomey, Elly Kramer, Irene Sherman, and Jason Patton, helped shepherd the chickies to the point you see them below. Fluff became less bookish and Chickiepoo covered up a little. In general, they became more realized than the pitch designs, less abstract and hopefully more relatable as little kids. 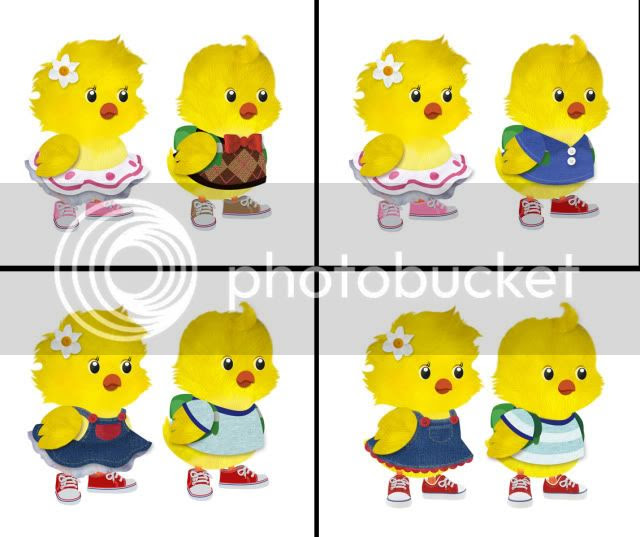 The greatest impact on the evolution of the design came as a result of Animation Director Elanna Allen's storyboards. While I was primarily a Photoshop designer at the time, she's a natural animator whose pencil drawings already communicated a buoyancy and movement that the designs were lacking. Plus, based on the demands of the story and their actions, the chicks needed to be tweaked for symmetry and with altered proportions that were more animation-friendly.

We employed a pretty new process, at the time, in which the guys at Peach Nova Productions would first animate key actions by hand in Flash and artists, like Hilda Karadsheh, would use actions to add the texture and shading in Photoshop. Then, After Effects animators, like Dayna Gonzalez and Keelmy Carlo, would also employ the Photoshop pieces for puppeted animation. 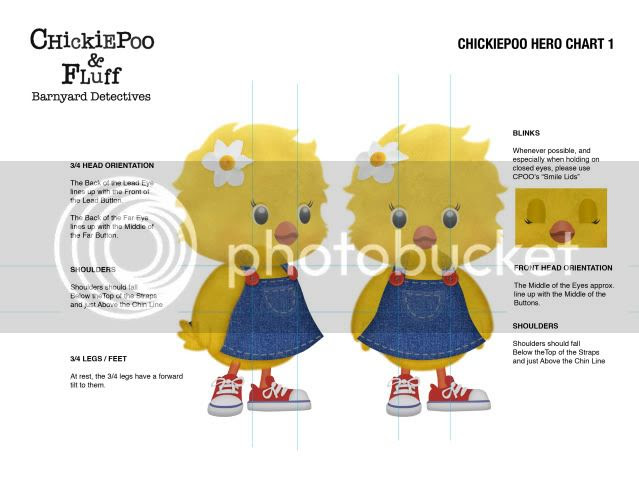 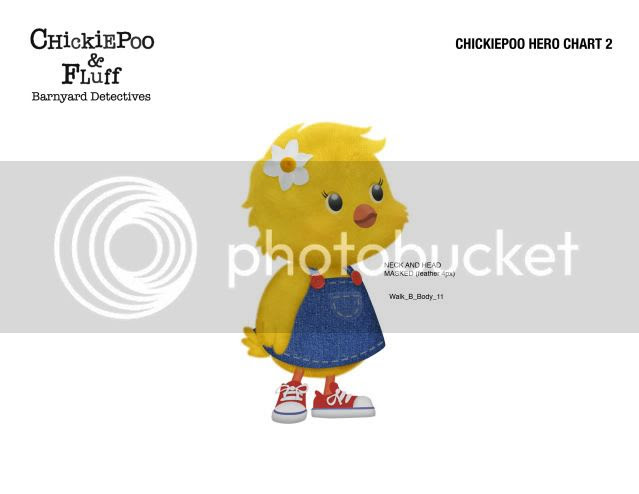 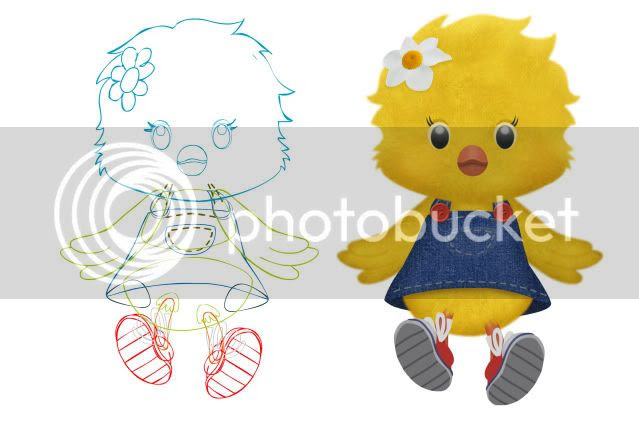 I'm sure I'm leaving a lot out but you're all welcome to add to the story in the comments below. This all happened to go down during a particularly rough spell in my life, but, then and now, I'm so grateful to have helped bring these little fluffs into the world and for the opportunity to work with the team that made it a reality.
Posted by Michael Lapinski at 10:06 AM 9 comments: 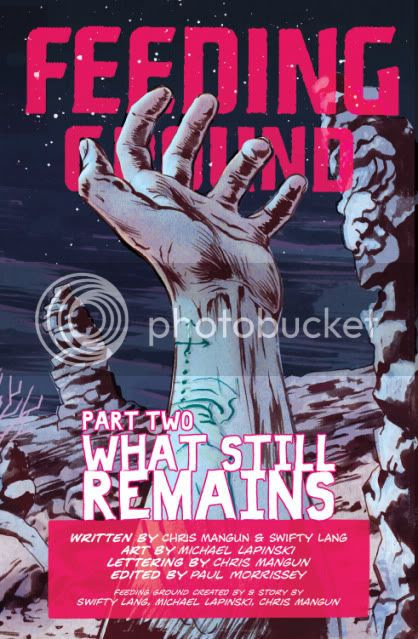 Now onto Issue 3!
Posted by Michael Lapinski at 3:36 PM No comments:

Labels: Archaia, Feeding Ground
Newer Posts Older Posts Home
Subscribe to: Posts (Atom)
Thanks for visiting PAWS AS HANDS, the personal art blog for Michael Lapinski, covering my work as comic book creator and animation art director. The blog was originally conceived as a HOW TO by a comic novice who was still learning HOW TO. Feedback encouraged. Cheers!