Apologies to anyone who has been waiting for Issue 5 to hit the stands.  We delivered it in March and have experienced still-unexplained delays at the printer. But, these mystery pains have subsided and we have a street date of June 22nd for Issue 5 and July 20th for Issue 6, the final issue.


In other news, our publisher, Archaia Entertainment, signed with a new distributor for their graphic novels.  Read the news here.


I'll definitely post any updates, but, in the meantime, here's a sneak peak... 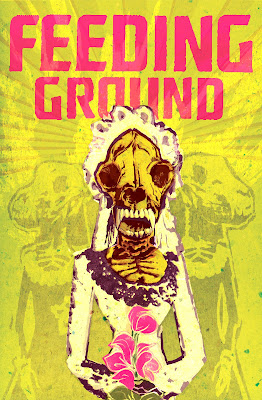 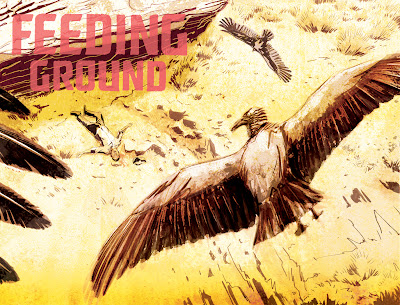 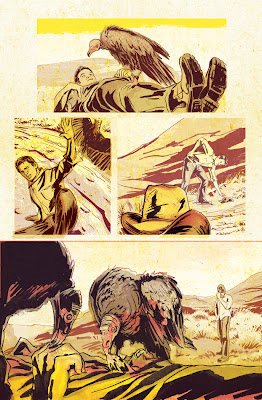 Posted by Michael Lapinski at 11:41 AM No comments:

COMIC EVENTS _ A Faceful of Knowledge 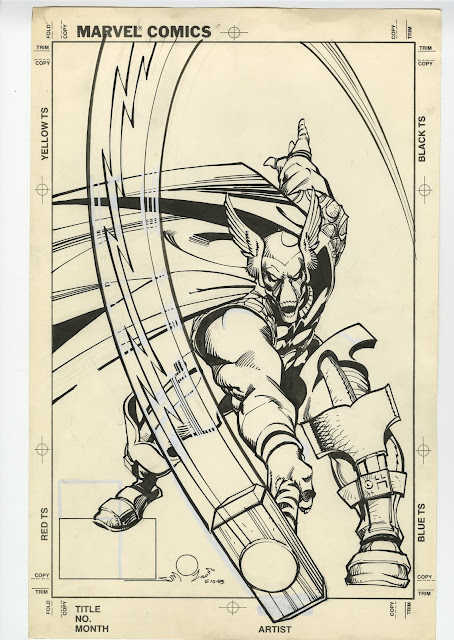 (art by Walt Simonson)
Wednesday night there was a 2-hour long panel discussion held at The Society of Illustrators and moderated by comic artist Dennis Calero.  Called "Drawing the Line," the event featured comic luminaries Jim Steranko, Walt Simonson, and Joe Quesada. Such different personalities, each renowned for different accomplishments in disparate eras, but they each share the trade of drawing for a living and all that brings with it.
Going in, my general starry-eyed observation and tribute is this: These guys build worlds with a pencil. As we are at the start of another Summer Blockbuster superhero boom here were two guys who each made an indelible mark on two of those creations (Simonson on Thor, Steranko on Captain America) and another, Quesada, who went from colorist to penciler to line editor to EiC and now Marvel's Chief Creative Officer who runs the Creative Team responsible for faithful translations of these characters and stories into other media.  And, here's the thing, as spectacular as these movies are (and Thor is a well-realized hoot) the collective talents of those film crews still can't evoke the hand of a single comic artist. Something is said with Steranko's use of graphic design or the raw energy of Simonson's hand-drawn special effects or Quesada's line quality and unreal flourishes (like the almost sentient rope of Daredevil's billy club) in a way that feels "real" in a comic and can never be translated onscreen or in real life.

Below, here are some examples of their art, my 2-cent biographies, and some memorable comments and advice from the night:

Just after the first fertile wave of Marvel Comics in the 1960s, Steranko infused the Kirby godhead of superhero art with techniques from the schools of commercial art, fine art, and film and crafted a visual language all his own.
Jim is a showman and a storyteller, an escape artist in his youth, he stated something to the effect of "After being strapped down with 80 lbs of lead and thrown in the river where your only other option is death, every other challenge in you life is put into perspective."
With the work ethic of the Greatest Generation and a burn to continually top himself, Jim is not one for artists' cheats.  To illustrate his point, he conjured the image of a 4-page spread, spread across two issues, as a conclusion to an 8 issue SHIELD story.  It was a huge payoff to the story, a reward for fans, a shrewd business decision (you had to buy 2 issues to complete it), and a challenge to the bombastic finales of the James Bond blockbusters of the day.
Jim's 4-word advice to artists looking to make a living at this? "Draw Like John Buscema." (see: How to Draw Comics the Marvel Way)
NOTE: Jim said that the above image was a challenge to himself to tell a full story in a single image.  He said it has 5 parts, each demarcated by a different light source.
SIMONSON 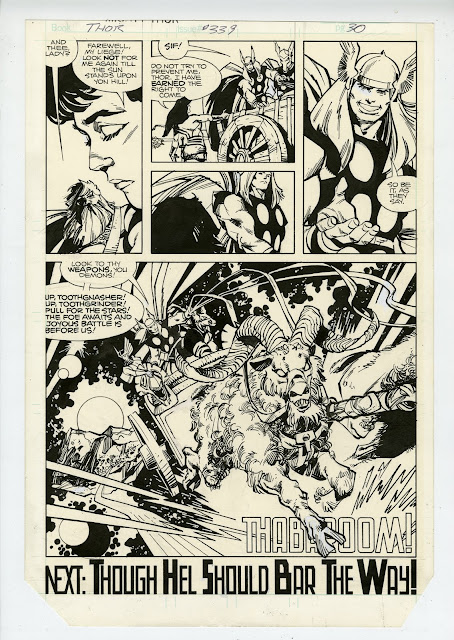 Walt was literally a student at the time of that first Marvel Age, schooled my generation with his seminal work writing and drawing Thor in the 1980s, and is now a teacher of comic art at SVA in NYC. With Thor, he took a character and book that was no longer all that successful and, due to low expectations, was allowed to endow it with all of his passion for mythology and the art of his idols. Many of his ideas (like the Cask of Eternal Winters) are now canon and have made their way into the feature film adaptation.

Towards the end of the talk, he was kind enough to share his entire course on comics in 3 simple rules:
1) You Must Love to Draw
2) Use Reference\
3) Everything You Do Must Service Story

Awesome anecdote: Running into a fully-wardrobed Anthony Hopkins as Odin while he himself was costumed as an Asgardian for a banquet scene.  Walt stopped, looked up, bowing slightly with a "My Lord." 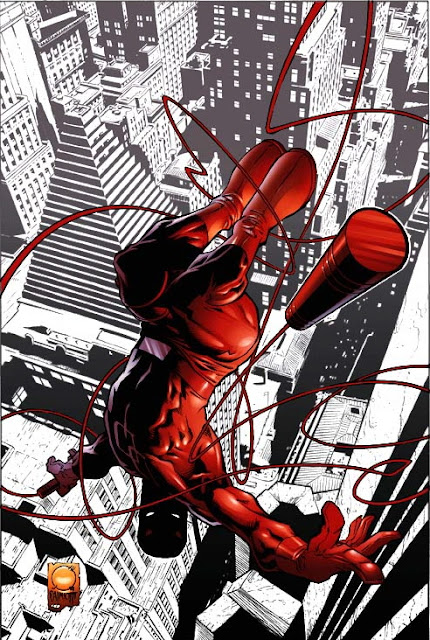 I mentioned a brief bit on Joe's accomplishments above, but, the quality that really came out during the talk was his dedication to the work.  The years developing craft, the hours wrestling with a panel, and the willingness to allow yourself to walk away and refresh yourself when it's not flowing.
While Jim pointed to filmic language as a reference point to drawing, for Joe it's music. Personally, I'm jealous of the immediate reaction, the give and take a musician has with his audience.  But, I'm totally with Joe when he says that rhythm of a song, the builds and turns, need to be there visually when you are constructing your story for its unseen audience.  Otherwise, it's all one-note.
FUN FACT: As an art student at SVA, Joe was an Illustration major and looked down upon comic art. As a result, he was failed by two of his professors, comic legends Will Eisner and Harvey Kurtzman, for neglecting to turn in his final assignments.
Last thought, the room we were in was hung with the art of student artists from around the country. An impressive amount of talent and the start of something new. Give it to the guys at the front of the room, who, despite their successes and years of experience, still treat every drawing as a new lesson, a challenge that keeps them looking to the future.
Posted by Michael Lapinski at 2:46 PM 4 comments:

"It is now complete." - Alejandro Blackwell 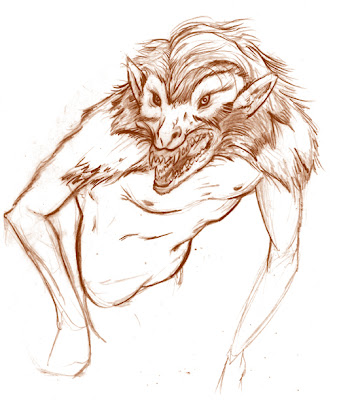 April 28th, 2008 was the first time I met with Swifty Lang and Chris Mangun to discuss a concept they were collaborating on that we were alternately referring to as COYOTE, BECOMING, and RAW DOGS.  On May 6th, 2011, after approximately 3 years and 160 pages, we delivered the final content of the final issue of the book that has become FEEDING GROUND.
It goes without saying that this could not have been done without the generous patience and support of our ladies, friends, and family as well as the time and talent of our translator and fourth Beastie, Nathalia Ruiz Murray.  But, I won't go thanking everyone just yet, because we're not done.
The six issues of FEEDING GROUND will be collected as two separate hardcover books (one in English and one in Spanish).  Rather than treat this thing as just a collection of our previous material, we want it to be the definitive version of our story, something we will be proud to see on bookshelves into the future.  It's a first work, so, there will always be a certain dread in seeing our learning curve etched on the page.  However, we owe it to ourselves, the reader, and the characters in the story to at least bring all that we learned over these six issues into crafting the best possible product at this point in time.
Thanks for reading and more to come...
(attached, you'll see the first drawing I ever did in conjunction with this book - ABOVE, along with the final drawing I did on 5/3/11 - BELOW) 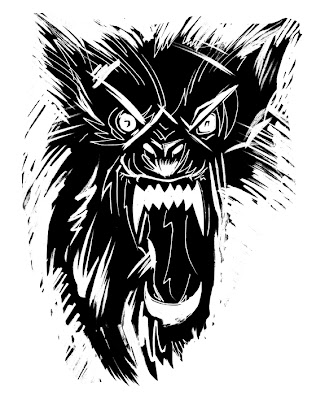 Posted by Michael Lapinski at 11:43 AM No comments:

A BUTTERFLY CIRCUS _ In Memory of Nancy Peréz

[NOTE: This was first written in 2011 after the killing of Osama Bin Laden]

Imagine that you're working in a solid office job but know that you're destined for something else. Nancy Peréz was just such a person, an aspiring writer who worked with my dad for the Port Authority of NY/NJ. She had written a story, "The Butterfly Circus," as a way to help give her shy nephew Kyle the confidence to attend school. Looking to take the book idea to a Publisher, Nancy asked my father if I might be interested in illustrating the story.  My first reaction was that there was A LOT of text for a picture book, but the gem of the story was so sweet. I was working in my own dream job as an animation designer. Long hours and a long commute but it was worth it. And here was this lady taking a shot at her own dream. Working at the old computer in my parents' kitchen, I was only able to illustrate a few sample pages as best I could. She was very nice about it and tried shopping the book around.  That was in 2000.

On September 11th of 2001, Nancy Peréz was one of the many victims of the attack on the World Trade Center. For me, these pages represent the lost potential of each and every one of the lives that were cut short that day. She had a dream and a talent few of her co-workers even knew about. I am honored to have known her and to have shared, even briefly, in her life.

Given the events of the past few days and current debates regarding the validity of releasing an image of death, I would like to share these images with you. In honor of what was lost and what could have been, may we always continue to chase our dreams and share the gifts, talents, and brief time we have been given with one another. 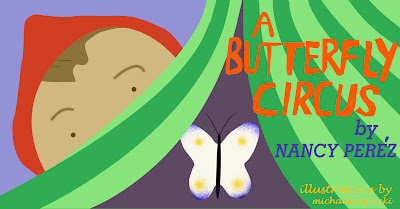 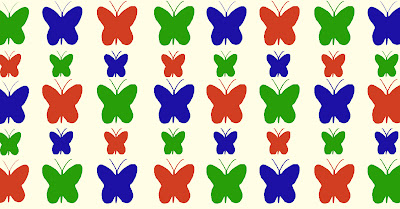 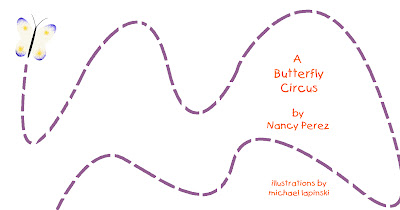 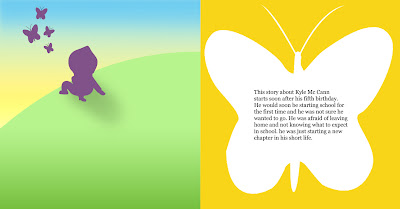 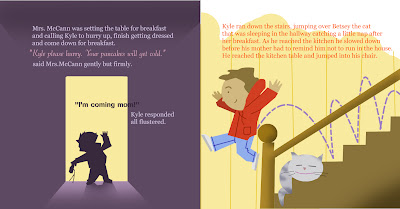 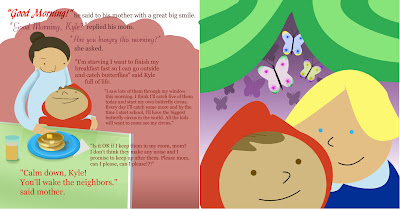 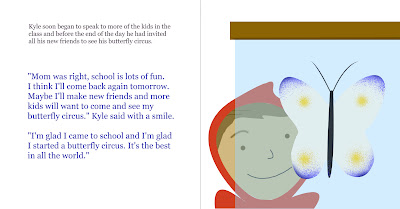 Swifty, Chris, and I originally created and pitched FEEDING GROUND when I was on hiatus from working as a Digital Designer on Nickelodeon's pre-K math show TEAM UMIZOOMI.
The show was created by my former BLUE'S CLUES Design Supervisor, Soo Kim, and she established an aesthetic that is both dense with detail as seen on the small scale of the characters and also infused with playful patterning.  The show also had a novel approach to animation that combined hand-drawn, After Effects, Flash, and CG all in order to invite the viewer into this world.  As an aside, the lead characters happen to look a lot like Soo and the uber-talented Art Director, Dino Alberto, and their robot friend is voiced by none other than Donovan Patton, "Joe"of BLUE'S CLUES fame.
While we wrap up work on FEEDING GROUND, I thought I would share some of my Season 1 backgrounds below: 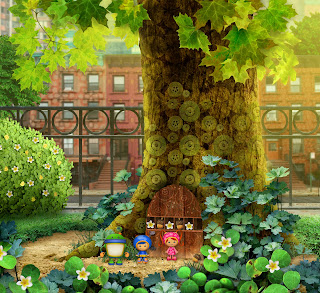 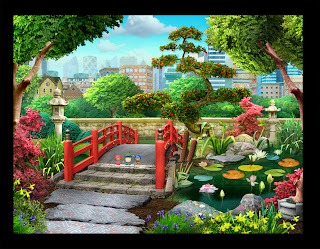 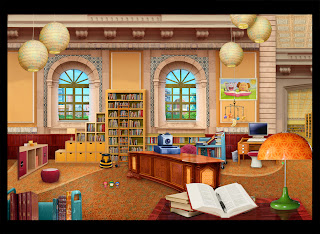 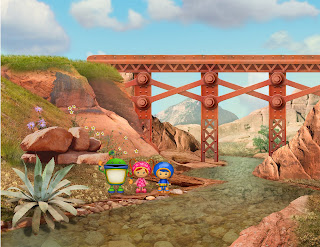 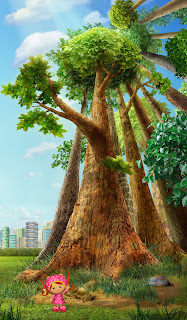 Posted by Michael Lapinski at 9:34 AM 2 comments:

Labels: Dino Alberto, Donovan Patton, Feeding Ground, Soo Kim, Team Umizoomi
Newer Posts Older Posts Home
Subscribe to: Posts (Atom)
Thanks for visiting PAWS AS HANDS, the personal art blog for Michael Lapinski, covering my work as comic book creator and animation art director. The blog was originally conceived as a HOW TO by a comic novice who was still learning HOW TO. Feedback encouraged. Cheers!