Growing up, no other work of art made more of an impression on me than The Muppets in all of their incarnations and Jim Henson has always been an idol of mine for the imagination, wit, and compassion he brought to his work. With that in mind, I've been very fortunate this past year to hook up with Mike Halsey and Don Culwell's MAGNETIC DREAMS Animation Studio in Nashville to work as Art Director on a number of Sesame Street-related projects. Not the first I worked on but the first out of the gate, the direct-to-DVD movie ELMO'S ALPHABET CHALLENGE was released this week.

Directed by John Hamm (not to be confused with the slightly less debonaire Mad Man) and with creative direction and character design by Rickey Boyd (a Muppeteer in his alter ego) ELMO'S ALPHABET CHALLENGE applied Sesame's classic sense of parody to a number of familiar video games as Elmo, Abby, and Telly are sucked into the game to battle an impy elf through the entire alphabet. All said, it was a feat to assemble what were essentially several mini-movies in totally different styles, each with their own set of challenges. After about 2 years of working out of my home studio, it's been rewarding to work in studio with such an incredibly talented bunch and I always get a thrill seeing everyone improve a work across the production pipeline.

As Art Director, I did a good deal of the concept art and on-air background art for the project that I can give some insight into the different segments here (click on art thumbnails to enlarge them). EAC was a huge team effort and I'll be shouting out other artists as I go. You can also learn more about the whole team, complete with head shots, HERE.

HAPPY WORDS
Confession: I had never even played Angry Birds before illustrating this parody background. With two lost days of addictive "research" I tried to cook up something that didn't look like any of the seemingly infinite number of game environments. The BG is designed to account for levels of atmosphere for the objects to fly past and to also allow for parallax between the layers of tropical foliage. This one was animated in Flash by John Hill.

JUST DANCE Parody
This scene is a cel-shaded spoof on Just Dance with motion capture choreography at the core of the animation (animator Andrew Lee Atteberry needed to play down his slick moves in his role as A.B.C-More). For this one, I proposed a number of backgrounds and ran some test animation of the lights to the music in After Effects. "Q, Q, Q!" The soundtrack rang in our heads for weeks. On these Sesame gigs, I try to sneak in nods to classic Sesame shorts when possible. Hard to tell because we went monochromatic here in order to pop the characters, but, can you place the homage that the background pattern is referring to? 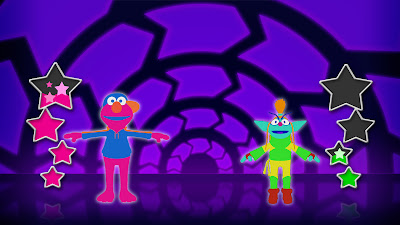 SUPER MUSTACHIO BROS.
A comp of 2D Photoshop assets in a 3D environment that's meant to evoke the art direction of the Super Mario world. We transition from the more fantasy pastoral landscape to industrial as the tension mounts. The real treat was being able to lay out the modular assets in side scrolling maps of the scene like those form the old Nintendo Power magazines. Long-time Nickelodeon co-hort Astrid Riemer was also an asset builder on this one. 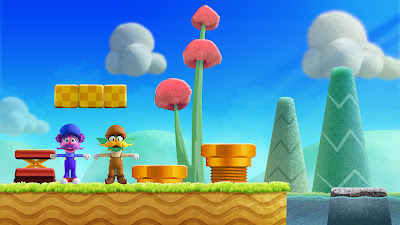 
PAC MAN Parody
Somehow this little bugger with all of its pixel specificity proved trickier to work out than some of the others but Elmo's "Muncha-Muncha!" line delivery was particularly cute. Astrid made the changes to the multiple levels. To the kids watching, I'm sure this looks as archaic as hieroglyphics. Jason Parish designed the pixel art objects. 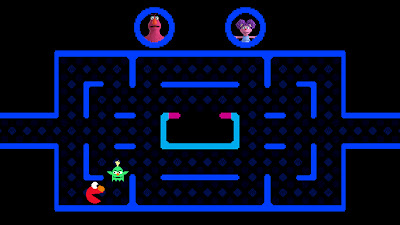 GUITAR HERO Parody
This is a collage mock-up of the stage, guitar neck, and other elements for the Guitar Hero parody that I constructed and lit in Photoshop. I'd say this is an example of a scene where our compositing team went above and beyond in terms of fleshing out the shots with their own lighting and atmosphere. Jason Parish designed the alphabet icons. 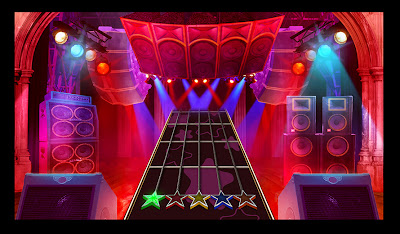 WORLD OF ELFCRAFT
I can't seem to locate my Photoshop collage/painted style frame for this one but, trust me, it was awesome. Below is a detail of the back plate I did for the CG environment that was modeled by Brad Applebaum (who, along with Craig Simpson and Jamie Coakley Jr., was also responsible for the design of the MARIO KART parody). I particularly enjoy this scene for the work of animators Abdel Pizarro and Matt Egler who I also got to share Qdoba and a cubicle bay with during the project.

Here's a preview (Spoiler Alert - it's for the letter "Z," the end of the alphabet and climax to the Challenge):