What happens when a hair metal band from 1986 is frozen by their hairspray and thawed out in 2019?


I directed this short pitch for series at Magnetic Dreams but it's very much the baby of creator John Compton, a former front man who lived the life and survived to tell about it (he died twice).

New for us to work on something Not Quite Safe For Work. I literally worked on this alongside projects for Sesame Street and a Christian curriculum but it felt our monitors were forever filled with assless chaps.

Below, some of the amazing and ridiculous artwork that went into making Passion Roxx possible.

It's rare that we already start a project with such strong art from the client. John arrived with two rounds of character designs by his artist friend Michael "Sheik" Tisdale. They already communicated so much about the look of the characters and the energy of the show. 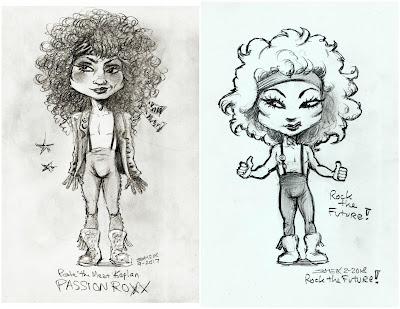 We knew that we'd be animating this in After Effects with a Duik rig, like we did on "One Shot," and we needed to make the characters more animation friendly and, to my eye, cartoony. The guy for the job was Devin Clark, creator of "Ugly Americans." He offered two rounds and I immediately fell for the giant hair, doll-like proportion version of the guys.

Along with final clean-up by Ashley Malone and what I crafted as an iconic "Scooby Doo" palette for the band, I felt like we arrived at a fun counterbalance to the crude humor and outsized personalities of glam metal.

To my mind, the band was 4 of the 7 Deadly Sins: Taz = Lust, Mike = Sloth, Vic = Pride, Pete = Gluttony. This schema helped me stage and direct the performances going forward. 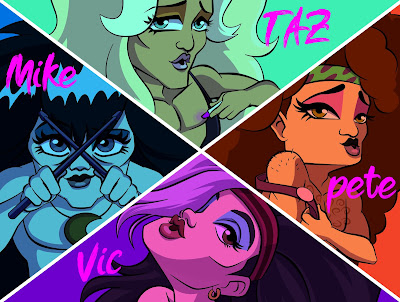 Here are more designs from Ashley. We discovered that our Producer Randall Saba worked at Tower Records in the 80s and used to ride his Vespa on the Strip. With that in mind, I had to make him the inciting incident for their accident. 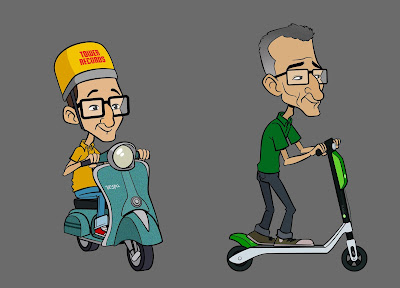 I also HAVE to share some of Kimberly Cranfield's secondary character designs. They are on screen for too fleeting moments to really show off how good they are.

I'm always grateful for the ways that board artists and animators plus up a shot and this was a spot of excess where I largely felt it was best to just keep saying "yes" and see what hits. Board artist John Fountain started us off right with a little gag of a coughing seagull that I think set the scene and tone of what's to come. 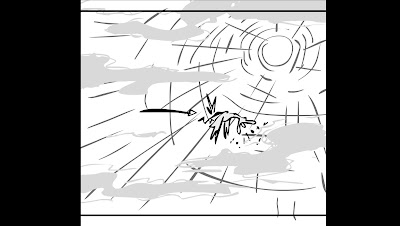 We all knew it was a shame when Magnetic animator and board artist Ben Fosselman recently moved to LA because he would have been perfect for the project. Luckily we got him for a few scenes that brought enough of the Ben we needed. 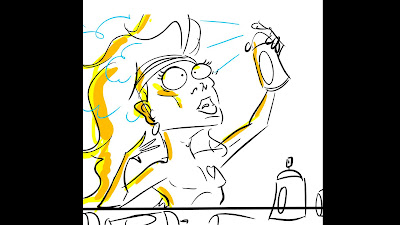 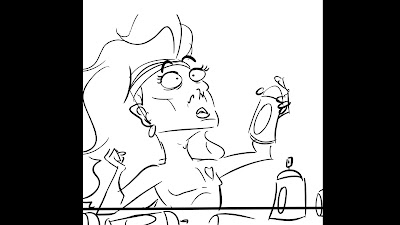 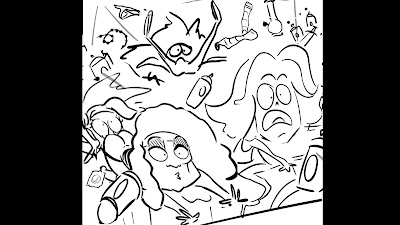 And, here's the finished shot by Ashley Malone and myself. 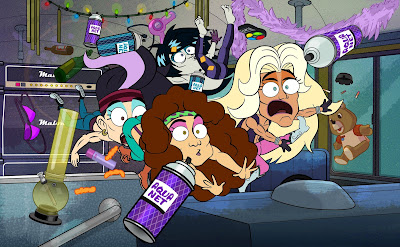 So many other key contributions from Tyler Goll on Edit (and utility on just about everything else), John Hill on EFX, and Abdel Pizarro on Comp.

I also wanted to shout out getting to work again with Keith Conroy. He headed up the Background department when I was at Ninja Turtles and he's always made a crazy amount of detail look easy. Below, some of his designs with color by me and Ashley Malone. 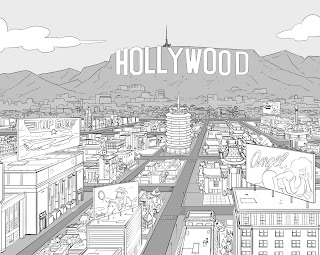 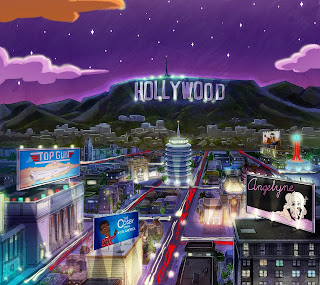 Posted by Michael Lapinski at 12:31 PM

Older Post Home
Subscribe to: Post Comments (Atom)
Thanks for visiting PAWS AS HANDS, the personal art blog for Michael Lapinski, covering my work as comic book creator and animation art director. The blog was originally conceived as a HOW TO by a comic novice who was still learning HOW TO. Feedback encouraged. Cheers!