ONE SHOT _ Making Of & Creator Credits


In early June, musician Hunter Hayes got the idea that he wanted to be a cartoon and an animated video for his single "ONE SHOT" was the way to go. Just before Labor Day and 400 man hours later we delivered our shot at it, above. 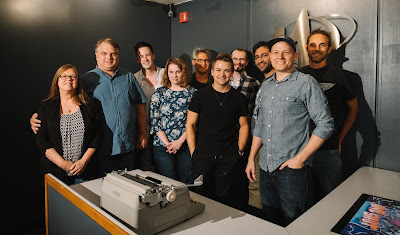 Hunter enthusiastically pitched the video to Magnetic Dreams Studio as starring a guy with "shot goggles" who thinks he's a superhero the more he drinks when the reality is far more mundane and messy. I fleshed out the concept from there with COO Jeff Galle and we tugged even more on visualizing those themes in the lyrics that yearned past the good times for another shot to get it right.

The story would be told from the perspective of a hungover Hunter rebuilding the night from false memories and embarrassing Instagram evidence to the contrary, each chorus a new bar and each verse a new reflection.

The first step would be to arrive at a caricature for Hunter (along with band and friends) and a look for the spot that communicated the spirit of "Hunter" and the song. It needed to have a little edge, like Family Guy meets Teen Titans, and a dose of superhero pop like Batman '66. 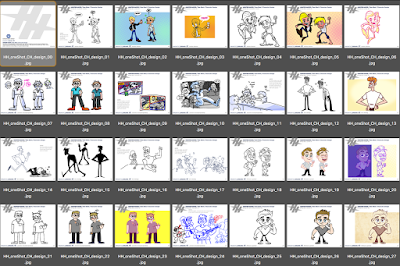 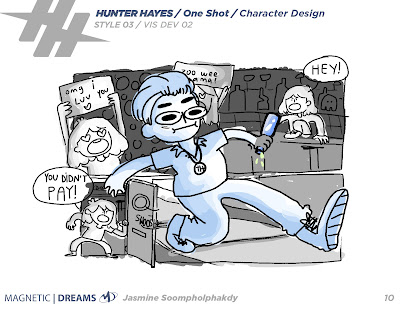 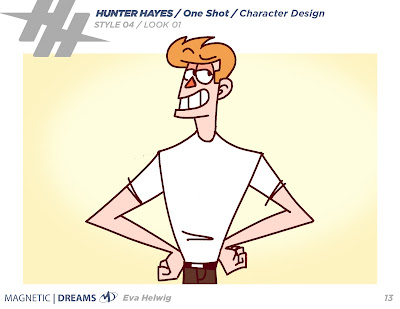 I have genuine affection for a number of the takes above and they would have resulted in a very different spot. But, the approved design by Ashley Malone, below, was that sweet spot that set us on our course. I knew she could cartoon but man it was also fun to find out how much fun she had drawing drunk Hunter's antics. With her design at the fore, Ashley became the lead designer, animator, and core of the project. 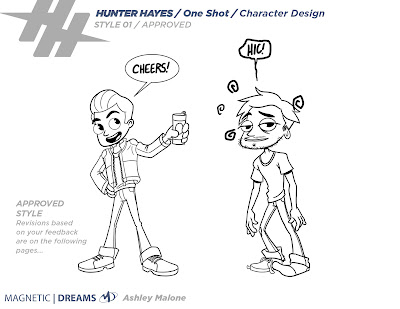 From there, a visual development team consisting of myself, Ashley, Trea Bailey, Eva Helwig, and Jasmine Soompholphakdy worked up the various gags and visuals that populated the story. 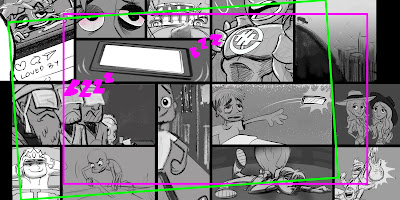 Various board panels from both Ashley and Trea that were later comped
together by Joel to create the opening montage.


One thing I couldn't shake was the need for both an unexpected element up front and a confidant to guide Hunter through his trough. I found both in the guise of a llama, llamas look inherently both comforting and condescending, that rode him home. I was prepared for everyone to shoot down the idea but it stuck. 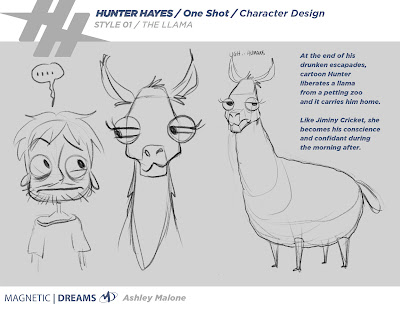 Final boards were illustrated by Trea and Ashley and Trea was crucial in illustrating the gorgeous images that would become painted key art at climactic moments. Editor Tyler Goll cut the animatic and we were off and running!

The great thrill of this project was to get the right people on the job and let them do their thing, especially with a quick turn pressure cooker deadline. For example, as sort of an animated superhero parody, I thought to call in a reunion of some Teenage Mutant Ninja Turtle buds who I knew would knock it out of the park even after almost 2 decades apart.

Below, I'm looking to credit everyone involved, not only with their job title but also with some of my favorite bits they brought to the project. Any pink text are links to their sites.

Ashley Malone (lead character designer, lead animator, board artist) - so much of Ashley is in the sheer volume of work that comprises this video. But, I'll forever love the moment I saw her clean-up of that initial side glance that the llama gives Hunter upon waking. Some of her rough sketches of Hunter in action were so good that I couldn't bear to lose anything in cleaning them up so I used them outright.

Board panels and final characters by Ashley Malone, final background by Michael Lapinski

Trea Bailey (character designer, background designer, animator, board artist) - Trea was a font of ideas, visual solutions to thematic questions, and his innate grasp of composition and body language resulted in such beautiful key illustrations like the band performance and pedal tavern. 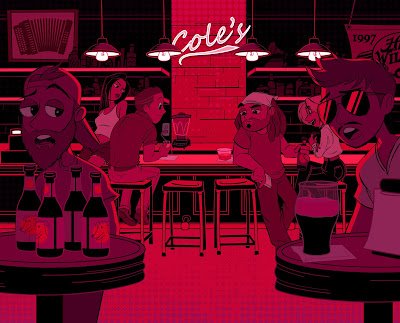 Jasmine Soompholphakdy (vis dev, sound effects designer and animator) - so glad to have Jasmine's sensibility on this project. I'm a fan of her personal work and just wanted her to be able to infuse it into her work with us, such as, the byzantine way she arrived at the brand for the cinnamon liquor AND THEN making it the sponsor of the race car.

Eva Helwig (vis dev) - Eva knows cartoons and she an her sister are starting their own cartoon empire. Her early takes on Hunter and the llama in particular were key to doing right by their relationship.

Kimberly Cranfield (character designer) - Kim was only able to be on for a brief while but she owned those hockey players.

James Elston (character clean-up) - Jim's a former Disney clean-up artist who we called onto the ice in overtime and delivered on finishes for hockey player key art.

Lisa Halsey (money lady, Predators fan) - a die-hard Predators fan, she refused to let me name our doppelgänger hockey team "The Nashville Noodlers" and instead christened them "The Smashville Catflingers."

Rickey Boyd (character clean-up, animator) - a man of many talents, it was great to get Rickey on this one actually performing one of his early loves, animation. Quick with the pencil, I was also fortunate to get him to draft an expressive moment of the pedal tavern passengers behind Hunter.

Keith Conroy (background design) - the man drew some of the most complex, perspective-driven, cityscape backgrounds in my time at Ninja Turtles and made total sense out of them. Who better to do a comic version of the honkey tonks of Nashville's Broadway? No one. 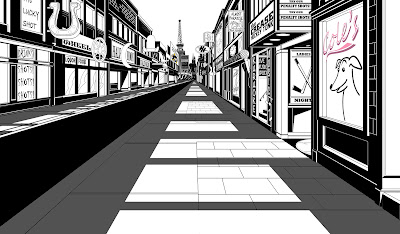 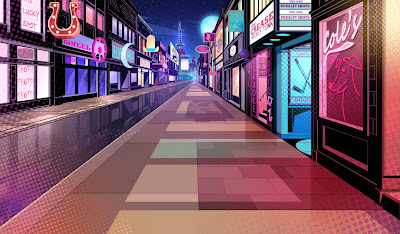 Emilio Lopez (digital painting) - E-Mann has the touch. A painter for cartoons, comics, and video games he's got a style that is both dynamic and nuanced and very necessary for the key art here.

Jimmy Tran (digital painting) - I didn't have the chance to work with Jimmy at Turtles but he quickly became a go-to color guy, making sense out of complexity and, in this case, making pedal taverns soar.

Abdel Pizarro (animator) - I knew any of the action shots belonged in Abdel's hands as well as crafting all of the anime blurs. But, it's the addition of a little butt wiggle to "broken Hunter" that will forever be his mark on this piece.

Shinichiro Matsuda (animator) - Shin has done great visual effects and comp work with Magnetic but it wasn't until "Doing It" that he cracked me up as a character animator. He's responsible for some of my favorite shots in both, the belt buckle slow dance in "Doing It" and Hunter stealing the drinks here. 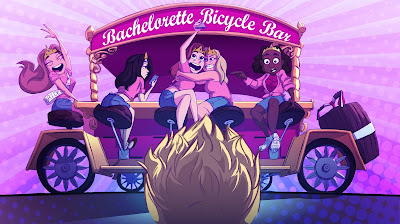 Joël Gibbs (comp artist) - already directing several other projects of his own, Joël jumped on here and brought above what was needed in turning each shot green and working with us through the 25th hour.

Tyler Goll (editor) - from literally start to finish, it's Tyler that got all our ideas to fit and hit. He also cut a perfect promo for the video using Jasmine's sound effects.

Randy Saba (producer) - beyond staffing this gig, the man has great taste in cartoons and I always knew I could trust his feedback.

Rhea Borzack (head of production) - the backbone of production/ comp, Rhea carries so much with grace, including a drunken Hunter.

Special thanks too for Jeff Galle and Mike Halsey for making this happen with Mike Dupree at Warner Music and being key sounding boards throughout the process. 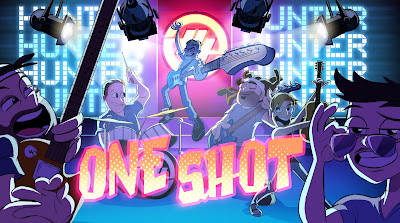 OK, if THAT wasn't enough for you, here's another 40 minutes below of me talking about creating the video with Hunter and Trea. Much respect for Hunter for not only wanting to do a project of this kind but also for launching from our studio in a total Made In Nashville fashion. It's rare to not only have this sort of creative freedom with his already cool creation but to also to be able to process it in public after it's all said and done.

Posted by Michael Lapinski at 4:34 PM

Newer Post Older Post Home
Subscribe to: Post Comments (Atom)
Thanks for visiting PAWS AS HANDS, the personal art blog for Michael Lapinski, covering my work as comic book creator and animation art director. The blog was originally conceived as a HOW TO by a comic novice who was still learning HOW TO. Feedback encouraged. Cheers!